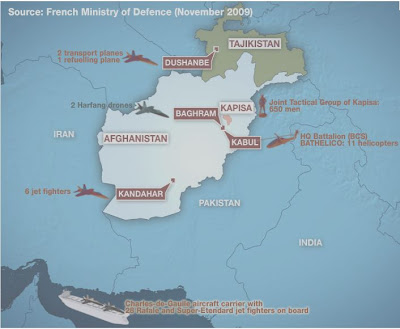 In a press conference this morning NATO spokesman Mike Wigston took responsibility for the bombing deaths of eight young shepherds in Kapisa province. Here is how Radio Free Europe covered the event.

“The U.S.-led NATO force in Afghanistan says it regrets that eight young Afghan males were killed in a NATO air strike in the northeastern province of Kapisa on February 8.

British Air Commodore Mike Wigston, a NATO spokesman, told a news conference on February 15 that the eight appeared to be carrying arms, according to Afghan and French troops who were operating in the area.”

Kathy Kelly has a more appropriate response in this article published yesterday.

“It’s hard to fathom the vast indifference of Western observers to what their militaries are doing in Afghanistan - to the lives lost, the futures broken, the families and friendships and loves torn apart - all of which will occur in the next country we collectively agree to demolish, and the next. Our apathy surely makes it easier for military and political elites to wage multiple wars. They count on us to look out at a world that we have been told is barbaric and feral, addled (unlike ours) with terrifying fundamentalism driving them (unlike us) to incessant violence.”

Here are some details from the press conference that the Afghan Government investigators held on Monday. Click on the image to read the Daily Star coverage. 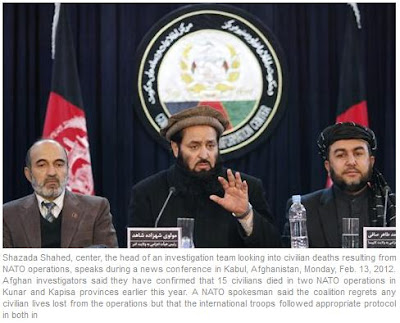 “It’s Valentine’s Day, and opening the little cartoon on the Google page brings up a sentimental animation with Tony Bennett singing “why can’t I free your doubtful mind and melt your cold, cold heart.”

Here in Dubai, where I’m awaiting a visa to visit Afghanistan, the weather is already warm and humid. But my bags are packed with sweaters because Kabul is still reeling from the coldest winter on record. Two weeks ago, eight children under age five froze to death there in one of the sprawling refugee camps inhabited by so many who have fled from the battles in other provinces. Since January 15, at least 23 children under 5 have frozen to death in the camps.

And just over a week ago, eight young shepherds, all but one under 14 years of age, lit a fire for warmth on the snowy Afghan mountainside in Kapisa Province where they were helping support their families by grazing sheep. French troops saw the fire, and acted on faulty information, and the boys were all killed in two successive NATO airstrikes. The usual denunciations from local authorities, and Western apologies, followed. (Trend News, February 10, 2012).”