Afghanistan’s Most Vulnerable | The Poverty of War 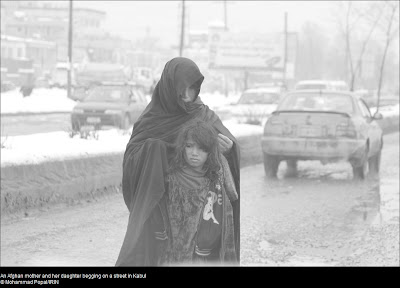 "At least 150 people in Afghanistan have died in the past month after some of the coldest weather for years." - IRIN

Afghanistan is one of the most poor, unstable and insecure countries of the world. Decades of war and military occupation by foreign powers have created one of the largest communities of displaced people in the world.

The death of so many Afghan’s highlights the tragedy of the U.S. commitment to war-fighting instead of human needs. See the most recent report by the Special Inspector General for Afghanistan Reconstruction.

IRIN is a service of the UN Office for the Coordination of Humanitarian Affairs and focuses on humanitarian news and analysis.

“DUBAI, 24 February 2012 (IRIN) - At least 150 people in Afghanistan have died in the past month after some of the coldest weather for years. The deaths - mainly of those without adequate food, housing or heating in Kabul and the northern province of Badakhshan - have prompted some to ask how this can happen given that the country has received billions of dollars of aid since the Taliban regime fell in 2002.

Sediq Hassani, director of policy at the Afghanistan National Disaster Management Authority, said every possible effort had been made to stock food and other items in the most at-risk areas, but acknowledged: “We were not 100 percent successful. There were districts to which, due to bad roads, we couldn’t send food items before winter started.”

“The ones who died were mostly the children of internally displaced persons who live in tents and mud-huts in Kabul and those poor families in other parts of the country who can’t afford to keep their homes warm,” said Health Ministry spokesman Kargar Norughli.

“I thought everybody was dead after an avalanche hit our village,” Ghulam Yahya, 48, from Eshkashim District in Badakhshan Province, told IRIN in Faizabad, the provincial capital. “I saw one of our relatives die after being trapped in the snow for hours. Many houses were destroyed by the avalanche.”

NGO Save The Children has launched a rapid response to get help to families as more heavy snowfall is predicted for this coming week and temperatures are expected to drop as low as minus 17 degrees centigrade.

See a slideshow about how the cold weather is affecting some of the country’s most vulnerable people.”