Death and Deception | A Colonel Speaks Out 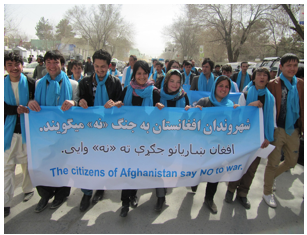 “Today, the New York Times reports that an active duty Army officer, Lieutenant Colonel Daniel L. Davis, has submitted a classified report to members of Congress that documents the failings of US policy in Afghanistan. More importantly, LTC Davis attests that senior leaders of the Department of Defense, both uniformed and civilian, have intentionally and consistently misled the American people and Congress on the conduct and progress of the Afghan War. The 58-page classified report he prepared, briefed and submitted to senators, representatives and cleared staff members over the last few weeks utilizes nearly 50 historical and current classified sources and draws from 250 interviews he conducted with soldiers throughout Afghanistan during his most recent year-long combat deployment.

In addition to the classified report, LTC Davis has written an 86-page unclassified version, as well as an article, published today by the Armed Forces Journal (below). These reports depict a near institutionalizing of dishonesty and deception by senior DOD leadership towards the American public and Congress. LTC Davis documents, as well, examples from the Iraq war and major weapons procurement programs to illustrate the persistent duplicity of the Pentagon's senior ranks. Victory narratives, career ambitions and institutional protection fuel these deceits. Deceits that have only delivered the loss of thousands of lives, the waste of hundreds of billions of dollars and the failure to achieve American policy objectives.”

Truth, lies and Afghanistan: How military leaders have let us down
BY LT. COL. DANIEL L. DAVIS

“I spent last year in Afghanistan, visiting and talking with U.S. troops and their Afghan partners. My duties with the Army’s Rapid Equipping Force took me into every significant area where our soldiers engage the enemy. Over the course of 12 months, I covered more than 9,000 miles and talked, traveled and patrolled with troops in Kandahar, Kunar, Ghazni, Khost, Paktika, Kunduz, Balkh, Nangarhar and other provinces.

What I saw bore no resemblance to rosy official statements by U.S. military leaders about conditions on the ground."

He ends with an appeal for truth.

"When it comes to deciding what matters are worth plunging our nation into war and which are not, our senior leaders owe it to the nation and to the uniformed members to be candid — graphically, if necessary — in telling them what’s at stake and how expensive potential success is likely to be. U.S. citizens and their elected representatives can decide if the risk to blood and treasure is worth it.

Likewise when having to decide whether to continue a war, alter its aims or to close off a campaign that cannot be won at an acceptable price, our senior leaders have an obligation to tell Congress and American people the unvarnished truth and let the people decide what course of action to choose. That is the very essence of civilian control of the military. The American people deserve better than what they’ve gotten from their senior uniformed leaders over the last number of years. Simply telling the truth would be a good start."