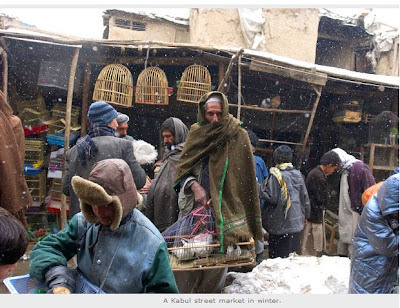 In December Maya Evans was part of a peace delegation to Afghanistan. Below is a profile she had published in Peace News. Peace News is a grassroots peace and justice movement building magazine in the UK.

In the morning we were visited by one of the female members of the Afghan Youth Peace Volunteers, Lena, a young, intelligent, outspoken Afghan woman who has just qualified as a teacher and has already taught in various schools inside Kabul.

Lena was very much anti-NATO intervention and felt that foreign involvement in Afghanistan was only bringing further violence and unrest. She also emphasised the importance of free state education for all, explaining that she could earn a very good wage working for private schools, but she preferred to work in government schools, educating the people of Afghanistan. She felt that providing she had food for lunch and dinner that was good enough for her.

We were then visited by Feda Mohammed, a former official in the ministry of education and now an education consultant. Over lunch, Feda, a slim, tall, middle-aged family man, dressed in a neat suit and tie, put across the opposing view to Lena. He was very much in favour of NATO and foreign intervention, his analysis was very black-and-white: Afghanistan could have either foreign occupation or the Taliban (a horrible prospect to most in Afghanistan, especially those who had experienced their previous reign). He viewed the killing of civilians by NATO as “collateral damage”, a necessary part of eradicating the Taliban, even if those deaths included his three sons.

There was a stony silence in the room.

AYPV Abduli, a 16-year-old Hazara boy from Bamiyan, whose father had been killed by the Taliban, was asked for his opinion. One of the most moving moments of my life then took place.

Abduli was silent for a while and then he quietly said: “If a Talib was in this room now, I know there is only one way forward to resolve the situation… forgiveness”.

I looked down and wept quietly. I wept for his pain and I wept for his strength and wisdom. I was astounded that such a young person, who had experienced one of the worst things a child could endure, had chosen the hardest path to walk. Without a doubt that moment will stay with me forever and whenever I weaken in my conviction to walk the path of nonviolence and forgiveness I will think of Abduli.

Maya also participated in a recent delegation to India with members of the Afghan Youth Peace Volunteers to India. Visit their inspiring travelogue here.
Posted by Peter at 9:38 AM