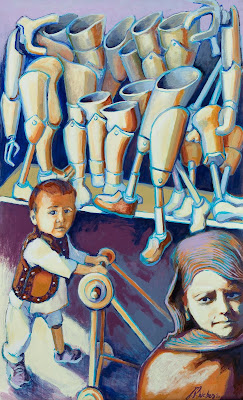 According to an International Committee of the Red Crescent (ICRC) survey from 2009, almost all Afghans – 96% – have been directly or indirectly affected as a result of the immediate or wider consequences of war; nearly half (45%) of those interviewed had seen a family member killed and a third (35%) has been wounded in fighting.

The UN and ICRC have also recorded that 730,000 people have been internally displaced in Afghanistan due to conflict since 2006, an average of 400 a day. At the end of January 2011, 309,000 people remained internally displaced due to armed conflict, human rights abuses and other generalized violence. This figure was higher than at any time since 2005.

These facts can help put into perspective, and better understand, the recent demonstrations in the country.

Kandahar in Revolt: The Quran demos in the light of history

Various things helped create the conditions for these demonstrations: the burning of the Qur’an itself, the recently published pictures of the so-called kill-team that shows smiling American soldiers holding up the head of a dead Afghan civilian, the immense pressure that the local population finds itself under, as well as the actions of the foreign forces and the Afghan government. Kandahar’s demonstrations potentially have far-reaching implications. They should be seen as indicators that are far more genuinely representative of ‘public opinion’ than any of the recent polls which claim to represent what people in the south are thinking.


Afghans for Peace also have some great resources that look at the broader issues involved.

The media’s the most powerful entity on earth. They have the power to make the innocent guilty and to make the guilty innocent, and that’s power. Because they control the minds of the masses.