The New School Year in Afghanistan 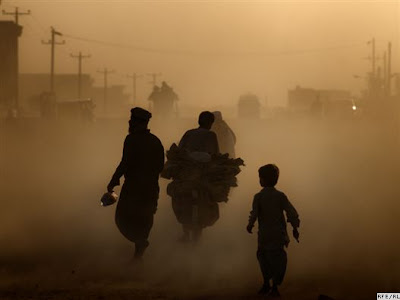 Dr. Zaher Wahab is a professor from Lewis and Clark College who spends four months of the year in Afghanistan teaching at the Teacher College in Kabul. An institution he helped to establish. He is an example of Afghan professionals returning to create a better future for the country. It is inspiring work with daunting challenges.

He comments that "[T]he education system, the country's only sure hope, is itself a disaster zone, and the millions of young Afghans with no education, employment or hope, a time bomb." This is the first reflection from his most recent trip. You can follow him on his blog Dispatches from Afghanistan where he offers snapshots of the impact of war and his work.

* In March Afghanistan’s National Environmental Protection Agency issued an advisory recommending the use of masks or other protective devices during the morning and evening rush hours in Kabul.

I arrived in Kabul on March 8 for my 14th visit to Afghanistan since early 2002. Safi airline from Dubai, touched down at Kabul international airport at 7AM. The airport, opened about a year ago, already feels small, congested, and old. The passengers were mostly non-Afghans of all types, races, and nationalities. Security was tight throughout, with exceptions for VIPs and Afghans with connections, who were spared standing in line, passport checks, or baggage inspection.

I was immediately impressed by the extreme air pollution, heaps of garbage by the road side, overwhelming signs of poverty, beggars everywhere, mud everywhere, crowds, monstrous traffic jams, and construction. Over the last decade, Kabul has grown from about half-a-million people, to 4.5 million; from a few thousand vehicles to a million vehicles; little waste to mountains of waste by the some 200,000 foreigners and the small over consuming Afghan class. The city still does not have a sewage system, any waste management, or regular garbage collection. And there is no urban planning. People just build any and everywhere, including the surrounding hills and mountains. Only the main roads are paved. People, dogs, cats, and animals are constantly going through the piles of globalized garbage spreading if further.

The predatory wealthy class builds gaudy Dubai-style mansions, without paving the sidewalks, or even cleaning up the trash with the work is finished. Most vehicles are second hand and all the fuel is leaded, mixed, and of the lowest quality. Most people still use wood, coal, cow dung, or plastics for cooking and heating. The foreigners, and the wealthy use generators fueled by gasoline, diesel, or kerosene. Very few structures have indoor plumbing or septic tanks, most use latrines, pits, or just nothing.

Since there is no sewage or draining system, since most roads are unpaved, and since it is windy in Kabul, you can get an idea what people breathe, eat and walk in. It is impossible to keep filthy dust and/or mud away. You can clearly see the thick air pollution affecting visibility. Consequently Kabul is probably the most polluted, filthy, toxic, and unhygienic capital in the world. Everyone, it seems, suffers from respiratory, skin and/or other illness, which prompted the previous minister of public health to state that pollution kills more people than the insurgents. This, after the US-NATO-Allies have been here for about ten years spending about $370 billion so far, and $3 billion per week currently.

Nouroze Start of the School Year

Monday March 22, marked the nouroze (new day) of the Afghan New Year--1390. Usually, this is a day of picnics, celebrations, festivities, visiting relatives, kite flying, and farmers showing/doing their stuff. Big festivals occur at the tomb and shrines of Imam Ali, Islam's fourth caliphate, cousin and son-and-law of the prophet Mohammad, in Mazari-Sharif and Kabul. This year, fear of violence, bombings, explosions and trouble kept most people away from public gatherings, though due to exceptional security measures, the day passed without any major incident.

As usual, there were many messages on the radio stations for the missing loved ones.

To "celebrate education," schools did not start on the day after New Year, instead they started on Wednesday, March 23. President Hamid Karzai rang the starting bell and gave a speech at the Amani School (first-twelfth grade) very near the urg, the presidential palace. Since he hardly ever ventures out, people call him a prisoner, the mayor of Kabul and/or the clown, and out of touch with the country. Needless to say all the talk on Thursday March 23 was about education. Officially eight million children, 387 of them girls, will attend 14,000 schools taught by 190,000 teachers. Since 65% of the country's population is under 20, about 7 million school-age children will not be in school. Half of the schools have buildings. There are no girl's schools in half of the country and there are very few, if any, women teachers outside the cities, where 75% of the people live.

Urban schools operate 2, 3, or even four shifts per day, reducing the school day to about 4 hours and the school year to about five months at best. Only a fourth of the teachers are considered qualified. Many children lack textbooks. There are no labs, libraries, cafeterias, athletic facilities, technology, indoor plumbing, or even electricity. School curriculum is old, bloated, and largely irrelevant to the needs or realities of Afghan life. Teaching consists of dictation, memorization, regurgitation and examination. There is little or no homework. Class size can range from 30-100.

There is an explosion of private schools, 450 schools and 36 tertiary institutions nationwide, without effective government oversight or quality control. As for "higher" education, there are 22 public postsecondary institutions enrolling some 90.000 students, 20% of them women. There is an explosion of private tertiary institutions too, again without any quality control by the ministry of higher education. Karzai chastised the substandard private sector. An estimated 1% of the population is enrolled in higher education.

The school year has begun, but the government has yet to announce the results of last year's university entrance exam (the concore), or the allocation of entrants to various institutions. 120,000 took the entrance exam, but only 60,000 will enter. Higher education too is beset with large classes, under-qualified faculty, lack of facilities and resources, old, incoherent, bloated and irrelevant curriculum, lack of funds, centralization, poor quality, lack of academic freedom, ethical issues, corruption and nepotism, and unequal access. Again, the occupation forces have been here for about ten years, spending $370 billion so far and $3 billion per week. The education system, the country's only sure hope, is itself a disaster zone, and the millions of young Afghans with no education, employment or hope, a time bomb.