Mohamed's Ghosts: An American Story of Love and Fear in the Homeland 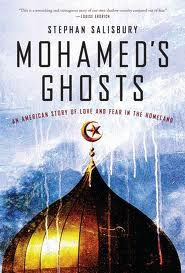 In May 2004, the FBI and local Philadelphia police raided the Ansaarullah mosque and arrested its imam, Mohamed Ghorab, on the charges that his first marriage had been fraudulent; he was eventually deported to Egypt. The incident is the focus of Salisbury's harrowing but shapeless book, which examines the devastation of Philadelphia's Muslim community after the government investigation and anti-Arab hysteria after 9/11.

A Pulitzer Prize–winning staff writer for the Philadelphia Inquirer, Salisbury builds the text around the personal stories of the many people he interviewed over four years; along the way, he delivers harsh criticism of the government's investigative techniques and draws explicit parallels to his own family's experiences with government surveillance in the late 1960s. Though digressive and anecdotal, the text acquires cumulative power, especially in its vivid portrayals of Imam Ghorab, whom it follows from his childhood, and his wife, Meriem Moumen, who discovered religion as a single mother in her 20s. Their heartbreaking story gives this frequently diffuse text a human center.

Last week Stephan spoke at Friends Center in Philadelphia as part of a forum looking at surveillance and intimidation of the Muslim community.

In The Sights of the FBI:
Assaults on Civil Liberties From COINTELPRO to Today

This year marks the 40th anniversary of the disclosure of COINTELPRO (Counter Intelligence Program) following the March 1971 break-in of the FBI office in Media, PA. Files removed from the office revealed a widespread program of surveillance, intimidation, and harassment of anti-war and radical social change activists.

Sponsored by the First Amendment Network (FAN), a coalition of groups committed to protecting free speech and the right to dissent.

Stephan Salisbury is the senior cultural writer for the Philadelphia Inquirer where he has been a reporter for three decades. He has covered everything from the Pennsylvania prison system, unrest in Ireland and Eastern Europe, the coup in Turkey, to the culture wars in the United States and disruptions of American life in the wake of September 11, 2001. He has received numerous awards and was a finalist for the Pulitzer Prize as part of an Inquirer team investigating local election fraud in 1995. He is married to the painter, Jennifer Baker; they have a daughter and a son.
Posted by Peter at 10:36 AM