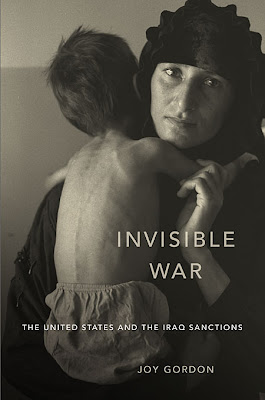 Joy Gordon has released her new book Invisible War: The United States and the Iraq Sanctions. She is touring. Check here to see if she is coming to your community.

There is a connection to be made between the international consensus on comprehensive economic sanctions against the people of Iraq and the ‘stated’ inverse of military led reconstruction to mitigate the humanitarian crisis of war.

The lesson from Iraq should be never again, the lesson from Afghanistan is you can't militarize relief and reconstruction and not expect a military response.

The economic sanctions imposed on Iraq from 1990 to 2003 were the most comprehensive and devastating of any established in the name of international governance. The sanctions, coupled with the bombing campaign of 1991, brought about the near collapse of Iraq’s infrastructure and profoundly compromised basic conditions necessary to sustain life.

“In one of the bitter ironies of our time, the UN Security Council--under the influence of the United States--destroyed a country in order to save it from its leader. In vividly portraying and thoroughly documenting the history of the Western decapitation of Iraq through economic sanctions Joy Gordon fills a huge gap in the literature. Her penetrating research reveals the purposefulness of punishment, complicity, rationalization, and outright deception as standard practice in the role played by the United States, which lacked critical self-reflection and any clear sense of rules or the relationship between means and ends. This book will become a foreign affairs classic.”— George A. Lopez, author of The Sanctions Decade

“In a powerful, original book, Gordon offers the most sophisticated and comprehensive analysis of the origins, administration, and impact of the Iraq sanctions regime. This is a damning account of how international administration was used by the U.S. and the UK for policy ends. Despite the rhetoric of humanitarianism, the sanctions were, in Gordon’s term, a humanitarian catastrophe.”—Neta C. Crawford, Boston University

In November 29 aid agencies working in Afghanistan released the report Nowhere to Turn: The Failure to Protect Civilians in Afghanistan. Deeply concerned about the impact of the escalating violence on civilians, they had this to say about the Provisional Reconstruction Teams.

NGOs have long expressed concerns that PRT projects are often poorly executed, inappropriate and do not have sufficient community involvement to make them sustainable. There is little evidence this approach is generating stability and, in many instances where PRT projects have been implemented in insecure areas in an effort to win “hearts and minds,” they put individuals and communities at risk. A study conducted by CARE, the World Bank and the Afghan Ministry of Education in 2009 found that many community members believed that PRT-constructed schools in insecure areas were at higher risk of attack by AOG than other schools.

Most Afghans live in extremely difficult conditions and will often accept whatever support they can get. However, PRT and other military-dominated structures delivering aid must ensure that their actions do not put civilians in harm’s way. Yet despite the mounting evidence, PRT lead nations have done little to address these concerns.

Overall, the quality and type of work, impact and sustainability of PRTs varies greatly among lead nations. There has been little to no success in coordinating the work they do as a whole and the majority of PRTs still do not even report to the Afghan government, at national or provincial level, on their activities. PRT expenditures amount to hundreds of mil-lions of dollars in provinces such as Kandahar and Helmand. But in the relatively secure province of Bamiyan, PRT expenditure is estimated to comprise more than half the development budget for the entire province.

It may be too late to effectively coordinate the work of many PRTs, but it is not too late to plan for a responsible phase down of their assistance activities. As many PRT lead nations are likely to begin pulling out their troops in the near future, a transition strategy must be developed now to mitigate any potentially adverse effects.

ISAF’s rhetoric around PRT transition has become “civilianize, nationalize, Afghanize.” However, it is unclear what this actually means and whether each PRT lead nation agrees with this imprecise approach. There has been recent talk of “handing over” PRTs to the UN or “evolving” PRTs into civilian units under the control of the Afghan government, which is somewhat perplexing given that PRTs have only an interim security mandate and were never intended to be permanent institutions.

Aid money, not PRTs, must be demilitarized. PRTs have, and are likely to continue to have, a strong military, counterinsurgency and counterterrorism association in the minds of Afghans. This severely impairs their ability to deliver effective assistance and support rural development activities in which communities participate. In accordance with their interim status, PRTs should be gradually phased out while civilian forms of assistance are gradually increased as appropriate.

Recommendations
• Establish and implement a plan to gradually phase out PRT-provided and other militarized forms of aid, enabling military institutions to return to a focus on security and security sector re-form.
• Donors should seek to increase the capacity of and funding for national and international civilian organizations, instead of through PRTs or other military-dominated structures.
• In line with this, donors and international NGOs must also do more to increase the ability of local organizations to design and implement development projects over time.
Posted by Peter at 8:01 AM