The Cost of War to Indiana 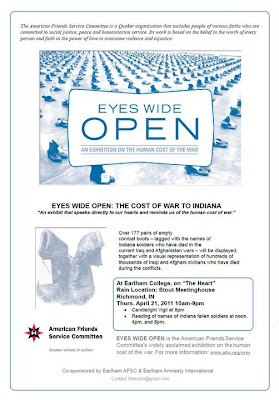 Eyes Wide Open, the American Friends Service Committee’s exhibition on the human cost of war in Iraq and Afghanistan, features a pair of empty boots honoring each U.S. military casualty. The exhibit started in January 2004 when the US casualties in Iraq numbered 500 as a local project in Chicago. As the casualties grew so did the exhibit and it toured the country extensively until May 2007. When the casualties in Iraq passed 3500 it was determined to split the exhibit up into smaller state-based exhibits. Eyes Wide Open has been seen by millions of people across the country and has involved thousands of volunteers.

Over 177 pairs of empty combat boots – tagged with the names of Indiana soldiers who have died in the current Iraq and Afghanistan wars – will be displayed with a visual representation of the hundreds of thousands of Iraqi and Afghan civilians who have died during the conflicts.