Talking to the Taliban - A Roundtable 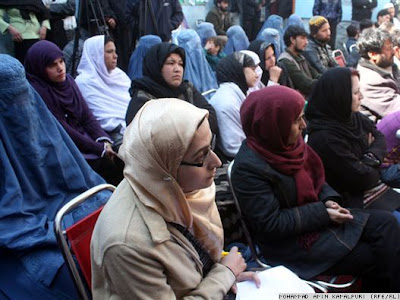 Decades of violence has traumatized generations, displaced one-quarter of the population and left hundreds and hundreds of thousands dead. Invasion, occupation, and intervention from bordering countries, and the arming of proxy militias by the US and others ‘outside’ powers have damaged traditional and governmental structures and elevated the use of force to resolve conflict.

The result has been a sustained absence of the rule of law and a culture of impunity on all sides. Many Afghans are addressing this challenge through concepts of transitional justice and the need for truth and reconciliation. Most of all there needs to be transparency. No more shortcuts and backroom deals at the expense of ordinary Afghans.

Will these principles be applied to negotiations with the Taliban?

Here is a sample of different positions.

Muhammad Tahir, writing for Radio Free Europe (Don't Negotiate Over The Heads Of The Afghan People) gives voice to the influential in order to make the case for truth and reconciliation. It begins with the wounds from the Taliban era.

"What kind of negotiations they are talking about?" she asked during a recent appearance on the U.S. radio and TV news program "Democracy Now." "The people want all those killers to be brought to criminal courts for the war crimes they have committed."

"There is no way the Tajiks would sit down with the Taliban," says Ahmad Zia Masud, the brother of the slain Tajik guerilla leader. "It's a grave mistake that the West is supporting these so-called negotiations."

A genuine and sustainable peace process must include a formal mechanism to ensure that everyone's concerns are properly addressed. The best forum would be a conference sponsored by the international community -- perhaps one reminiscent of the Bonn Conference in 2001 that brought the interim government to power after the fall of the Taliban.

At the same time, it should be clearly stated that no real reconciliation can take place without a truth-finding process to clarify the nature of crimes against humanity committed both by the Taliban and its opponents during the long years of internal Afghan conflict.

This does not necessarily have to lead to criminal prosecutions. That would undoubtedly complicate the efforts to find a lasting peace in Afghanistan. The experience of post-apartheid South Africa's Truth and Reconciliation Commission offers a fitting example of the sort of process Afghanistan needs. The Karzai government is fond of referring to "reconciliation" but less eager to talk about the "truth" component of the equation. But lasting peace cannot happen without both."

Chatham House: No Shortcut to Stability: Justice Politics and Insurgency in Afghanistan

“The challenge is that it is precisely now, when the pressure is growing, that it is most important to have a long-term perspective, to recognize that there is no shortcut to stability. That requires making justice an issue of core interests, one that will command not just lip-service but serious political capital when it comes into conflict with other priorities. This is the single overarching recommendation of this report, for both Afghans and foreigners: that the strategic weight given to justice should be much greater across the board. What this means in practice will vary from case to case, though a key element is the need to send a coherent political signal. Substantive change will inevitably involve a degree of political heat (indeed that will be a sign of an effective impact), and will demand compromise, diplomacy and tactical intelligence rather than simply the promotion of abstract principles; it can only be one part of a strategy to build”

“The National Stability and Reconciliation Law was passed by parliament in 2007 by a coalition of powerful warlords and their supporters to prevent the prosecution of individuals responsible for large-scale human rights abuses in the preceding decades. The amnesty law states that all those who were engaged in armed conflict before the formation of the Interim Administration in Afghanistan in December 2001 shall "enjoy all their legal rights and shall not be prosecuted."

"The existence of this law is as much a test of the principles of Afghanistan's international backers, such as the United States, as it is of Karzai," said Adams. "Will they stand with abusive warlords and insurgents, or will they stand with the Afghan people?"

Is talking to the Taliban a betrayal of Afghanistan’s women?
New Internationalist Magazine

"The US is scheduled to start a partial withdrawal of forces from Afghanistan in a couple of months’ time. Talk is in the air of a negotiated settlement with the Taliban. But what would it mean for Afghan women and the rights that they have struggled to gain in recent years? Our debaters this month, Orzala Ashraf and Michael Semple, are both passionate workers for peace and justice – but they take opposite positions on a thorny issue with global ramifications."