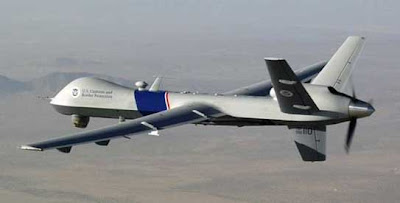 The U.S. relies heavily on the covert, CIA-run missile program to kill al-Qaida and Taliban fighters in Pakistan's northwest. Pakistan publicly denounces the strikes, but secretly assists the program.

The drone-fired assaults were the first since a mid-March strike that Pakistan's army chief said took out dozens of peaceful tribesmen. A U.S. official denied innocent people were targeted.

It is now revealed that last Wednesday US-Drones also killed two US troops when Marines, under fire, called in a drone strike that hit friendly troops by mistake. It is believed that this is the first time that U.S. service members have been killed by a Predator in a friendly-fire incident.
Posted by Peter at 5:54 AM