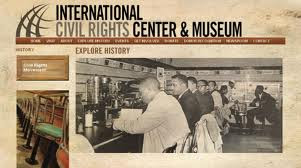 On Saturday I had a chance to visit the new International Civil Rights Museum in Greensboro (North Carolina). It is a dramatic space built around one of the nation’s most powerful statements against racial segregation and the bold actions of four young men from North Carolina A&T University. Locals call it the sit-in museum.

It is a sweeping exhibit. Documenting how the civil rights movement used mass nonviolent action to change the face of the South. Inspiring.

I was pleased to discover at the end of the tour – along a moving portrait wall and iconic images from Tiananmen Square and Berlin – that there was a looping video clip affirming modern nonviolent movements and direct action.

The clip features only one person and a crowd she was inspiring in Afghanistan.

The woman was Malalai Joya.

In the fall of 1959, four young men (Joseph McNeil, Franklin McCain, Ezell Blair, Jr. and David Richmond) enrolled as freshmen at North Carolina A&T University. The four young men quickly became a close-knit group and met every evening in their dorm rooms for "bull sessions". It was during these nightly discussions that they considered challenging the institution of segregation.

The breaking point for the group came after Christmas vacation when Joseph McNeil was returning to N.C. A&T after spending the holidays at home in New York. McNeil was denied service at a Greyhound bus station in Greensboro. McNeil’s frustrating experience was shared by the group, and they were willing to make the necessary sacrifices - even if it meant their own lives - to provoke change in society.

On that final night in January 1960 in Scott Hall, the four friends challenged each other to stop talking and take action. They didn't realize the journey they would take the next day would ignite a movement, change a nation and inspire a world.

Joseph McNeil, Franklin McCain, Ezell Blair, Jr. and David Richmond (The Greensboro Four) entered the F.W. Woolworth store in Greensboro, N.C., around 4:30 p.m. and purchased merchandise at several counters. They sat down at the store's "whites only" lunch counter and ordered coffee, and were denied service, ignored and then asked to leave. They remained seated at the counter until the store closed early at 5 p.m. The four friends immediately returned to campus and recruited others for the cause.