Deadly Embrace – The War in Afghanistan 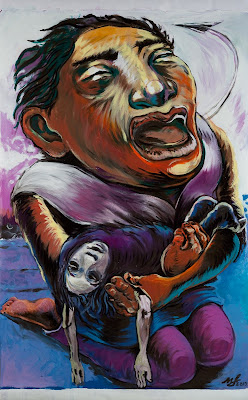 The mural image Eternal Scream is from the travelling exhibit Windows and Mirrors: Reflections on the War in Afghanistan. The image is by Michael Schwartz in Tucson Arizona.

"The suicide bomber, dressed in police uniform, hugged commander K.M Mujahed, Kandahar’s chief of police as he was leaving his office this afternoon, and detonated the explosives strapped to his body, shredding both of them, and two others, into pieces. The Karzai government, the International Security Assistance Force, and the US embassy all condemned Mujahed’s assassination.

This was the third “hug and kill” of a prominent figure and the latest incident in a series of nine spectacular, violent episodes the occupation and resistance have inflicted on each other in the last few days in the war-torn country. There has been a sharp escalation in anti-American and anti-Western feelings in recent months expressed in various forms. COIN has failed miserably. The insurgency has penetrated all organs of the Afghan state."

"Most Afghans are exhausted by 32 years of bloody turmoil and the decade-long brutal American occupation without an end date or endgame in sight. Hence, appearances notwithstanding, there is a strong undercurrent of anti-foreign (especially anti-American) sentiment throughout the country with frequent street demonstrations and burnings of the US flag and Obama’s effigy. Demonstrators chant “death to America” and “go home America.

Zaher Wahab, a professor from Lewis and Clark College, is currently teaching in Kabul. His latest dispatch (4 May 2011) is a cautionary tale; a vivid description of the on-going violence in Afghanistan and the failure of the United States military policy. The growing animosity against the United States and other foreign armies is spelled out.

To read the entire story click here.
Posted by Peter at 2:19 PM