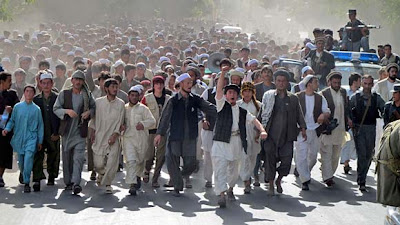 Twelve people were killed and 80 wounded in violent protests this morning against the killing of two men and two women, accused of being insurgents, in a night-time raid by foreign troops in north Afghanistan, Afghan officials said.

Hours after the pre-dawn raid, more than 1,500 people carrying the bodies of the four dead marched into Taloqan, the regional capital of Takhar Province where the raid took place today

Local police and residents said the four people killed in the raid late on Tuesday night in Taloqan were civilians.

"American forces entered a house in a village near Taloqan city, the capital of Takhar province, around 12:30 a.m. As a result, four people were killed. Two of the deaths are women," Abdul Jabar Taqwa, the provincial governor, told McClatchy in a telephone interview.

Afghans fear that U.S. forces, flush with success over the raid that killed Osama Bin Laden in Pakistani, will increasingly rely on the tactic of swooping down in darkness on residential compounds.

With 150,000 foreign troops in the country violence across Afghanistan has reached its highest levels since the Taliban were overthrown in late 2001, with record casualties on all sides of the conflict.

The latest civilian deaths come at a time of high anti-Western sentiment. Last month, seven foreign United Nations staffers were killed when protests against the burning of a Koran by a fundamentalist U.S. pastor turned violent.

Michael Semple documents a NATO targeted killing (of the wrong person) in the same province that was featured in the Frontline special Capture/kill.
Posted by Peter at 7:49 AM