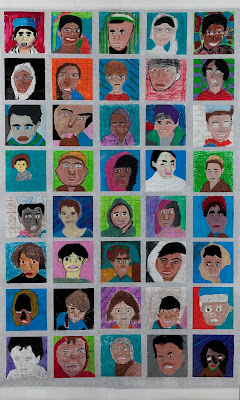 The Many Faces of Afghanistan

mural image is from the traveling exhibit Windows and Mirrors: Reflections on the War in Afghanistan.

The mural was created by 6th grade students from Locke Elementary School with Karen Light in Chicago. The project description is at the bottom of this message.

The students are about the same age of the young girl killed in the night raid documented below.

“My daughter, who was sleeping with us in the courtyard, was hit by the bomb’s shrapnel in her head, and she died on the spot,” Mr. Mohammed said.

NATO issued a statement that said she had been shot. “An individual ran out the back of the compound toward the outer security perimeter and was killed when the security force mistakenly identified what they suspected was a weapon on the individual,” it said. “Later, the force discovered the individual was an unarmed Afghan female adolescent.”

The uncle, Shukrullah, who like many Afghans uses only one name, was a police officer; he had recently been transferred to Surkhrod District, where the raid occurred. He was 25 and had a wife and two daughters, said Mr. Mohammed, who was his brother-in-law and in whose home he was staying.

A police officer who arrived after the shooting said that Mr. Shukrullah, who was a graduate of the police academy, was at the house that night only by chance.”

“For Mr. Mohammed, the words were little comfort. “They killed my 12 year-old innocent daughter and my brother-in-law and then told me, ‘We are sorry,’ ” he said. “What does it mean? What pain can be cured by this word ‘sorry’?”

As a part of their International Baccalaureate education which promotes intercultural understanding and respect as essential parts of live in the 21st century, sixth grade students at Locke Elementary School read The Breadwinner by Deborah Ellis. Following the Main character, Parvana, an Afghan girl who dresses as a boy to make money for her family under the rule of the Taliban, students learned about the culture of people on the other side of the world. This lead to a discussion about the war in Afghanistan: why the United States is engaged in combat there, and what the students thought about war and oppression. Whether they felt like the war was a good idea or not, they all agreed that the killing of innocent people including children their own age was terrible and enough to challenge us to think of better solutions to world conflicts.

To further demystify the Afghan people, the students each received a picture of an Afghan child and drew it using the grid method onto a larger square. Next, they painted the base colors which involved learning that all skin color is made out of different amounts of the same four colors: red, blue, yellow and white. Last, students shaded their portraits using oil pastels. The result is a patchwork of color and expression reflecting the diversity and vitality of the culture. Let these murals serve in memory of the innocent children who have lost their lives and those who continue to suffer in the war.
Posted by Peter at 10:36 AM