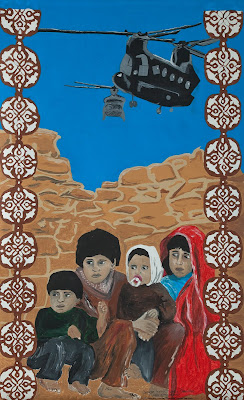 The mural image Hidden Children is from the travelling exhibit Windows and Mirrors: Reflections on the War in Afghanistan.

The image was created by the Guilford College Community with Hannah Swenson, Courtney Mandeville and Layth Awartani.

"The targeted killing of Osama Bin Laden has given a boost to those in the US who believe this is also an effective strategy to defeat – or at least degrade – the Taleban in Afghanistan. This new report from senior analyst Kate Clark (Afghanistan Analysts Network), warns against this strategy, stressing that the legality of targeted killings depends on the accuracy of the intelligence which drives them."

The Takhar attack:
Targeted killings and the parallel worlds of US intelligence and Afghanistan
Kate Clark | 10 May 2011 | Afghanistan Analysts Network

"On 2 September 2010, ISAF announced that ‘coalition forces’ had killed the Taleban deputy shadow governor of Takhar who was also a ‘senior member’ of the Islamic Movement of Uzbekistan (IMU) in an air attack. Immediately, Afghans, including the provincial governor, police chief and President Karzai insisted an egregious mistake had been made and civilians who had been campaigning in Afghanistan’s parliamentary elections had been targeted. Ten were killed and seven injured. The military has remained adamant to this day that it got the right man."

"The findings of this investigation raise systemic concerns over the intelligence that drives this and other targeted killings in Afghanistan. Targeted killings – as one element of the so‐called ‘kill or capture’ strategy – are one of the main metrics of success claimed by General Petraeus and an ever more important aspect of international military policy in Afghanistan…"