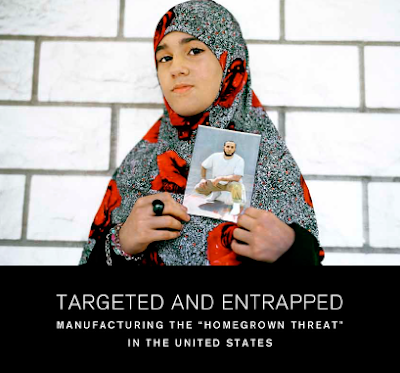 Wake up, open your eyes, look around you, see how this world has changed… At least take 5 minutes to look into these cases, and research, and look for real proof. (Lejla Duka, age 13, daughter of Dritan Duka, defendant in the “Fort Dix Five” case.)

This report looks at the history hehind three high profile arrests in New York and New Jersey. The Newburgh Four, the Fort Dix Five and Shahawan Martin Siraj in Bay Ridge. It documents the effort by some government agencies to conflate Muslims with terrorist and terrorism.

It also reveals the way Islamophobia has been used to sustain public fear and support for a global war on terror.

Since September 11, 2001, the U.S. government has targeted Muslims in the United States by sending paid, untrained informants into mosques and Muslim communities. This practice has led to the prosecution of more than 200 individuals in terrorism-related cases. The government has touted these cases as successes in the so-called war against terrorism. However, in recent years, former Federal Bureau of Investigation (FBI) agents, local lawmakers, the media, the public, and community-based groups have begun questioning the legitimacy and efficacy of this practice, alleging that—in many instances—this type of policing, and the resulting prosecutions, constitute entrapment.

This Report examines three high-profile terrorism prosecutions in which government informants played a critical role in instigating and constructing the plots that were then prosecuted. In all three cases, the FBI or New York City Police Department (NYPD) sent paid informants into Muslim communities or families without any particularized suspicion of criminal activity. Informants pose a particular set of problems given they work on behalf of law enforcement but are not trained as law enforcement. Moreover, they often work for a government-conferred benefit—say, a reduction in a preexisting criminal sentence or a change in immigration status—in addition to fees for providing useful information to law enforcement, creating a dangerous incentive structure.

The government played a significant role in instigating and devising the three plots featured in this Report—plots the government then “foiled” and charged the defendants with. The defendants in these cases were all convicted and are facing prison sentences of 25 years to life. These prosecutions—and others that similarly rely on the abusive use of informants—are central to the government’s claim that the country faces a “homegrown threat” of terrorism. Serious questions have been raised about the government’s role in each of these cases, as well as around the set of laws that have facilitated these practices. They also raise fundamental human rights concerns.

Newburgh is an extremely impoverished town. How much money did they spend on this whole production? They need to be investing in our communities for the future, not spending millions of dollars on a fake case that makes nobody safer.- Alicia McWilliams, aunt of David Williams, defendant in the “Newburgh Four” case

There are many stories that overlap. Many men in our communities have been targeted, and the women and children are left out in the cold.- Shahina Parveen, mother of defendant Shahawar Matin Siraj

The International Human Rights Clinic (IHRC) at New York University School of Law provides high quality, professional human rights lawyering services to community-based organizations, nongovernmental human rights organizations, and intergovernmental human rights experts and bodies. The Clinic partners with groups based in the United States and abroad. Working as researchers, legal advisers, and advocacy partners, Clinic students work side-by-side with human rights advocates from around the world. The Clinic is directed by Professor Smita Narula of the NYU faculty; Amna Akbar is Senior Research Scholar and Advocacy Fellow; and Susan Hodges is Clinic Administrator.
Posted by Peter at 11:45 AM