Afghan Civil Society: A Look From Within 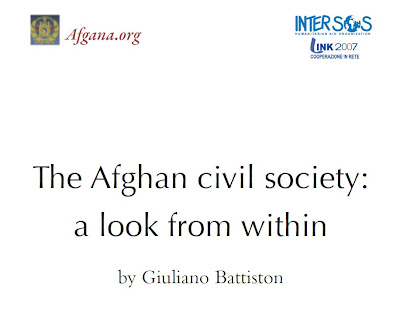 The report has ten thematic chapters looking at the many ways community organizers are doing peace work. He explores militarization of humanitarian aid, relations with the Afghan Government and the International Community, the role of the media and culture.

The pages are absolutely packed with quotes from Afghan workers illustrating this largely hidden and under-appreciated aspect of Afghanistan.

“The agenda of the international community and western countries is dictated by safety. The problem is that it is a question of their safety, not that of the Afghans. And it is Afghanistan as a whole that suffers, as the agenda of safety has ended up replacing that of the reconstruction and development of the country”, Aziz Rafiee, ACSF, Kabul. (page 18)

“There is no lack of reasons for joining the anti-government movements: people have seen no reconstruction; farmers are accused of supporting the Talibans and are often arrested, their fields destroyed by the bombing and innocents killed. The people here do not understand the reason behind so much suffering: they see themselves being bombed, without understanding what fault they have. For them, foreigners do not bring peace, but rather are those that kill the innocent, demolish homes. A far cry from reconstruction and aid to civil society”, Ghulam Muhammad Masoomi, journalist, Kandahar. (page 18)

“We have explained on many an occasion to the representatives of the PRT that it is wrong to mix humanitarian work with military. In recent times, it would appear that they have finally understood that it is counterproductive both for us and for them”, Mohammed Anwar Imtiyaz, ADA, Kandahar. (page 18)

“We are working on the legal sector, because we believe that trust in the institutions, in the government can only return when access to justice is guaranteed to all. And that a functional legal system is a fundamental condition for a strong civil society. Unfortunately things are still a long way behind”, Abdul Subhan Misbah, LAOA, Kabul. (page 22)

“We organise conferences, peace processions, round tables with various players of the society, politicians, students, ulema, the younger generation, women. We are, in fact, convinced that it takes coordination to obtain good results. And that the media are an extremely useful peacebuilding tool”, Alhaj Ghani Hashimi, Mediothek Afghanistan, Jalalabad. (page 30)

“Three decades of war have destroyed almost everything in Afghanistan. Before the war, there were different expressions of civil society, even if they did not go by this name, there were ‘traditional’ forms. We need to focus on forms of civil society that are purely Afghan, such as the cultural forms, the most important. They played an essential role even in periods of conflict: at times of war, journalists, poets and writers worked to provide the population with information and make the conflict less harsh. Despite the destruction of war, there are still a great many very important cultural resources that should be valued. And we need to work on education, on literature and schoolbooks for children, who tomorrow will be governing our country. Education and culture are essential, because they shape the way the younger generations think. There are still schoolbooks around that speak of weapons and fighting. It is time to propose other values”, Sohrab Samanian, Writers’ Association of Balkh. (page 38)