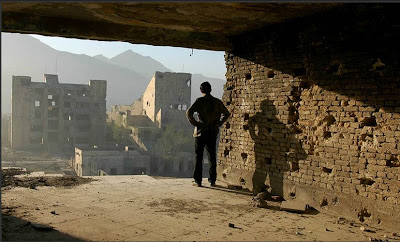 Sometimes the only way to get a true Afghan story is to have an Afghan woman take the photos. - FARZANA WAHIDY

When asked why photojournalism is important to Afghans her reply was wise.

“Over 90% of Afghans are illiterate, so they can’t read to get information about their country and the world. I find photojournalism more useful because such a large percentage of my country’s population gets their news from looking at photos.”

While illiteracy is less of a problem in the United States, the amount of information available, and the length of the war has elevated photojournalism to a new height.

It shows us the answer to this simple question.

“What has been the impact of the war for Afghans?”

Click here to read the full interview from warshooter. You will learn more about one of the many woman-activist-role-models that are helping to build a brighter future for the country.

Farzana Wahidy was born in Kandahar, Afghanistan, in 1984 and moved to Kabul at the age of six. She attended school during the years of the Afghan civil war. After the Taliban came to power and prohibited the education of women, she secretly attended an underground school located in an apartment with 300 other girls. When the Taliban were defeated Farzana continued her education, completing high school then enrolling in a two-year program sponsored by AINA Photojournalism Institute.

In 2004 Farzana began working part-time as a photojournalist for Agence-France Presse, becoming the first female Afghan photojournalist to work for an international wire service. Farzana also freelanced for a variety of international clients and her pictures were published in the Sunday Times, Le Monde 2 and Gent magazines and in a book entitled Collective Number 5 – Photographie et Compagnie. Later she joined the Associated Press news agency.

In 2007 Farzana received a scholarship to attend the two-year Photojournalism Program at Loyalist College in Belleville, Ontario, Canada, and she graduated in June 2009.

In 2008 Farzana was one of four recipients of a Merit Award from the All Roads Film Project and Photography Program sponsored by the National Geographic Society.

In 2008 Farzana received a gold award in the Portrait category in the College Photographer of the Year competition at the University of Missouri.
Posted by Peter at 12:45 PM