New Investigative Reports on US Spying 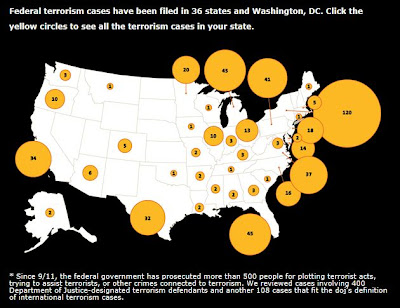 Last summer the Washington Post released the results of a two-year investigation into government surveillance. What they found was chilling.

“The top-secret world the government created in response to the terrorist attacks of Sept. 11, 2001, has become so large, so unwieldy and so secretive that no one knows how much money it costs, how many people it employs, how many programs exist within it or exactly how many agencies do the same work.”


To give you an idea of scale.

Some 1,271 government organizations and 1,931 private companies work on Top Secret programs related to counter-terrorism, homeland security, and intelligence at over 10,000 locations across the country. Over 850,000 Americans have Top Secret clearances.

Today the Associated Press has released the findings of an investigation into the NYPD.

Since the terrorist attacks of Sept. 11, 2001, the NYPD has become one of the country’s most aggressive domestic intelligence agencies. A months-long investigation by The Associated Press has revealed that the NYPD operates far outside its borders and targets ethnic communities in ways that would run afoul of civil liberties rules if practiced by the federal government. And it does so with unprecedented help from the CIA in a partnership that has blurred the bright line between foreign and domestic spying.

The transformation of the NYPD - and the individuals involved – confirm broader systemic changes taking place around the country. They are seen most clearly in the creation of fusion centers with their unprecedented mix of federal, state, local and private contractor spying. Here is how they are defined by the ACLU.

Trevor Aaronson, writing in Mother Jones magazine, explores the massive spy network created by the FBI to prevent another domestic attack. Asking “[A]re they busting terrorist plots – or leading them?”.

He focuses on several high-profile case of entrapment.

The article includes a searchable terror trial database, where 508 post-9/11 domestic terrorism cases are analyzed. He builds on a list compiled by the US Department of Justice and including additional cases that meet DOJ's criteria. In their review of the 508 terrorism-related cases, Mother Jones found that 53% did NOT involve terrorism charges.

Database: Terror Trials By the Numbers