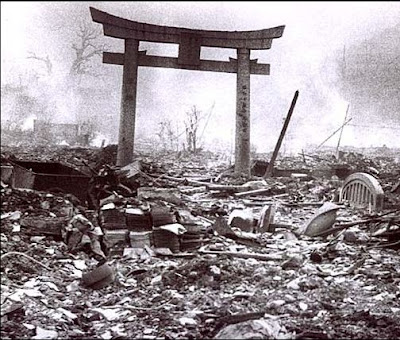 The U.S. bombing of Nagasaki 66 years ago today killed some 80,000 people. Three days earlier, the U.S. had dropped another atomic bomb on the Japanese city of Hiroshima, killing up to 140,000. This year is the first time a representative has attended the annual memorial service in Nagasaki.

On August 6th. 1945, at precisely 8:15 in the morning, the U.S. detonated an Atomic Bomb over the city of Hiroshima. Three days later on August 9th, at precisely 11:02 in the morning - a second Bomb was exploded over the city of Nagasaki. The Japanese called it pikadon (flash-boom). There was a blinding flash of light brighter than the sun, followed by a tremendous shock wave and a searing blast of heat. Huge poisonous mushroom clouds ascended into the sky and a deadly radioactive black rain fell. Those at the center of the blasts were incinerated, leaving only their shadows behind. Others were crushed flat by the concussion of the blasts. Those within a mile and a half of the explosions died from unimaginable burns and intense radiation.

On the 11th of August, photographer Yosuke Yamahata took this picture of what used to be the Ichino-torii (shrine-gate), at the entrance of Sanno-jinja Shinto shrine. The city is dead - not a single living thing can be seen. The rubble smolders and heat penetrates the soles of the photographer's shoes. The torii did not collapse because it stood parallel to the enormous blast, but the rest of the shrine was completely obliterated.

Yamahata's pictures are compiled into an astounding book, titled Nagasaki Journey. They not only provide a first-hand look at the terrible destruction of Nagasaki... they warn against future atomic wars.