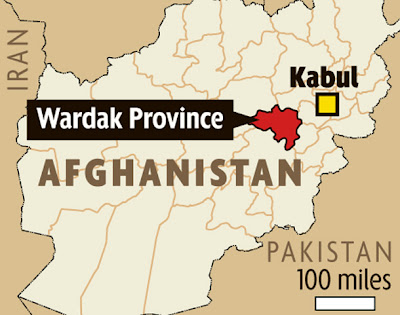 This morning it was announced that those responsible for the shooting down of a US Chinook helicopter on Saturday 6 August have been killed by NATO-led airstrikes.

The helicopter was shot down while conducting a night-raid in Wardak province. Thirty US troops, including 22 Navy SEALs, an interpreter, and seven Afghan special operations soldiers were killed. It was the largest loss of life for foreign forces in a single incident since US forces invaded Afghanistan in 2001.

The commander of the U.S. forces in Afghanistan was more blunt saying "that the Taliban insurgents who shot down [the] U.S. military helicopter... [had] been hunted down and killed by allied forces.


Abubakar Siddique has some lessons learned in Radio Free Europe.

As the U.S. military and civilian leadership come to grips with the loss and await the results of an investigation into its contributing factors, there is a short list of potential lessons already emerging:

Although outside observers and Afghan military experts speculate that the insurgents might now have access to sophisticated antiaircraft weapons, a U.S. administration source described the Chinook downing as a "last lucky shot." But the Taliban subsequently claimed to have shot at and struck another Chinook in the mountainous Zurmat region of the southeastern Paktia Province on August 8. NATO acknowledged that one of its helicopters made a "hard landing" but denied Taliban claims that militants had killed 33 foreign troops in the attack.

Afghan military specialist Amrullah Aman says the insurgents constantly change their tactics. "In Afghanistan's neighboring region, Taliban are helped with weapons and logistics," he claims. "Eight years ago, they were not in a position to fight pitched battles."

The fear is that insurgent access to sophisticated antiaircraft weapons risks a recast version of what's been dubbed Charlie Wilson's War, when U.S.-supplied Stinger missiles rendered the Soviet air force ineffective. In the current conflict, NATO relies on its superior air force to counter insurgents' use of their native terrain and control over parts of the population.

Helicopters are the primary means of transportation for the many night raids U.S. troops routinely conduct across Afghanistan. In what is considered a repeat of the Iraqi model of dismantling insurgent networks, U.S. Navy SEALs frequently descend on remote mountain villages to kill or capture insurgency leaders. Successive U.S. military commanders consider such raids a weapon of choice against battle-hardened enemies and have increased their frequency.

But the killings have inadvertently promoted a younger generation of insurgents into leadership positions. These Taliban leaders espouse a harder line and sympathize with Al-Qaeda's global jihad. And they have spread panic among Afghanistan's ruling elite -- following the assassination of a number of senior Afghan officials this year, many Afghan government officials are now preoccupied with ducking would-be Taliban assassins.

The downing of a U.S. helicopter so close to Kabul suggests the Taliban are inching closer to the Afghan capital -- the biggest prize in any Afghan war. In the past few years, Taliban fighters have systematically infiltrated rural communities in Wardak, Logar, Kapisa, Nanagarhar, and Laghman provinces, which nearly ring Kabul. The situations in Wardak and Logar, abutting the Afghan capital in the southwest and southeast, are particularly dire because the Taliban now dominates all aspects of life. A presence in these provinces is considered crucial to eventually taking over Kabul -- something the Taliban appear to have their sights set on.

Arguably the most significant thing to take away from the Chinook downing, though, is that war is still the order of the day in Afghanistan. The Taliban, with the help of its backers and allies, is trying to bleed Americans sufficiently to force them out of the country. Washington, on the other hand, believes that killing a large number of Taliban militants, leaders in particular, will force the Taliban to negotiate on favorable terms. Afghan civilians, already dying in significant numbers, will continue to suffer the price.