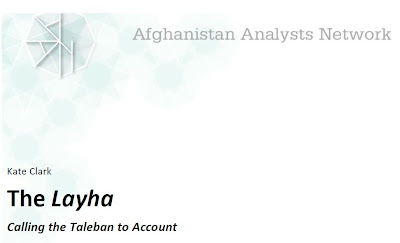 In June, the UN issued its first bi-annual report for 2011 on the protection of civilians, the Afghanistan NGO Safety Office also release their second quarter data report. Both studies identify dramatic and sustained increases in civilian deaths.

What is clear from both reports is that targeted assassinations are increasing being used on all sides. Foreign forces have accelerated the use of drone strikes, assault helicopters and night raids while anti-government forces have increased suicide strikes, roadside bombings and killing of government officials.

This is made clear in Erin Cunninghams article on Kandahar in yesterday's GlobalPost.

“People in Kandahar are stuck between two governments: one is the government of [Afghan President Hamid] Karzai, and the other is the Taliban government,” says Hajji Naik Mohammed, an elder from the Noorzai tribe in Kandahar’s Panjwayi district, 12 miles from Kandahar city."


In this report Kate Clark, a senior analyst with Afghanistan Analysts Network (ANA) looks at the Taliban Code of Conduct or Layha. She finds opportunity in the evolving document as a way to help reduce suffering in the conflict.

The latest Layha was issued a year ago, and the two previous in 2006 and 2009. Each new version of the Code has been longer, more detailed and more polished. The Layha is a rule book for the Taleban, but it is also an aspirational document, projecting an image of an Islamic and rule-bound jihad and a quasi-state.

Some articles in the Layha amount to orders to violate both international and Afghan law. However, there are also a number of articles that if applied could reduce civilian suffering. For example, the Code threatens punishment against fighters and officials who do not ‘with all their power’ take care of the ‘lives and belongings of the common people’ and it includes attempts at judicial safeguards, such as bans on torture and forced confessions. There are also numerous attempts to stamp out what could be called ‘jihadi entrepreneurship’, using the fight as cover to exploit people and make money.

Obviously, large gaps exist between rules and action and the articles that call for the protection of civilian lives and property are often not heeded or are intentionally violated: attacks leave dozens of civilians dead, suspected spies are assassinated and local people are forced to pay taxes. However, the fact that winning the support of the local population is crucial appears also to have led to some changes since 2006. For example, orders in the 2006 Code to beat and (eventually) kill recalcitrant teachers, burn schools and have nothing to do with NGOs – which were described as ‘tools of the infidels’ – have been quietly dropped in 2009 and 2010.

Through examples, Clark shows how pro-active use of the Layha has resulted in reactions from the Taleban. For example, when UNAMA reported in mid-2010 that most civilian casualties were due to insurgent attacks and criticised the Taleban for violating their own Code, it hit a raw nerve. The Taleban reacted strongly, with denial, indignation and a call for the setting up of a joint commission on civilian casualties. A small scrap of common ground was opened up in the stated desire by all parties to protect Afghan civilians.

Click here for the executive summary.
Posted by Peter at 9:35 AM