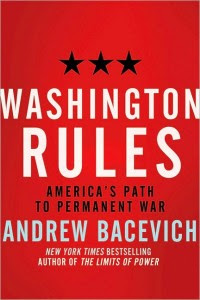 An analysis of recent events, including the December 2009 troop escalation in Afghanistan are explored in this interview.

It's a good companion to the book review.

"Andrew J. Bacevich has emerged in the early years of this century as the country’s most widely read and widely respected critic of U.S. militarism and empire. He has addressed this issue with unprecedented intensity for an academic. With the appearance of Washington Rules, he has produced six books addressing illuminating these themes in the span of a single decade, writing three major books American Empire (2002), The New American Militarism (2005), and The Limits of Power (2008), and editing two other volumes, The Imperial Tense (2003) and The Long War (2006).

In attracting a broad readership to his critique of American militarism, Bacevich has transcended both the arid tone of virtually all academic writing on the history of foreign and military policy and the right-left divide over social and political values. As a former army officer, a Catholic and a social conservative from the mid-West, he has appealed to both conservatives and radicals unhappy with both the militarized pursuit of power abroad and the encouragement of unlimited individual self-gratification at home. He has argued that the all-volunteer army is the nexus between these twinned developments in American society and global policy.

In Washington Rules, Bacevich offers a series of ruminations on how and why the United States has come to what he calls “a condition approximating perpetual war….” He begins by positing a consensus held firmly by the U.S. political, business, foreign policy and media elite ever since the end of World War II consisting of what he calls “the sacred trinity” of principles: global U.S. military presence, global power projection and global interventionism.

Bacevich argues that the “socialization” of the political and intellectual elite into this catechism of global U.S. has been so complete that American citizens “have essentially forfeited any capacity to ask first-order questions about the fundamentals of national security policy”. He cites the dismissive treatment of Dennis Kucinich and Ron Paul because of their refusal to endorse the catechism during the 2008 presidential primaries.

Because of the absence of any serious challenge to this catechism of global exertion of U.S. power over the decades, Bacevich argues, Americans had come by the turn of this century to “accept the use of force as routine”. The result was that the Bush administration to capitalize on the 9/11 terrorist attacks to take the United States into the present situation of “permanent war”

In The New American Militarism, Bacevich had sought explanations for the militarism of the post Vietnam period in the right-wing reaction to Vietnam-era radicalism, the rise of the Christian right, and the “cultural and intellectual currents emblematic of the postindustrial or postmodern mood” (“the end of history”, globalization, virtual reality, the CNN effect, etc.). In Washington Rules, however, he probes more deeply the nature of the national security state itself in search of causation.

Bacevich cites as a “partial explanation” for the Kennedy administration obsession over Cuba the way in which domestic U.S. politics provide incentives for presidents to rely on force merely to inoculate themselves from criticism by the opposition (either from the opposing party or within the Republic party itself) for being “weak”. That same factor obviously applies to a wide range of presidential decisions on military and foreign policy.

But Bacevich gives even more attention to the personal and institutional interests of the military and civilian national security elites in creating their own “empires”. In sketches of the roles played by CIA director Alan Dulles and commander of the Strategic Air Command Air Force Chief of Staff Curtis LeMay during the Cold War, Bacevich observes that both those pivotal figures lobbied the White House for policies (covert operations and investments in massive numbers of bombers and nuclear weapons) that benefited their institutions and conferred prestige and power on them personally. Of LeMay, Bacevich writes that his “concern for the well-being of the United States blended seamlessly with his devotion to the well being of the institution he led.”

In discussing Vietnam, Bacevich eschews single-factor explanation, referring to a litany of personal, political, perceptual and cultural factors. Nevertheless, he also invokes a structural factor with broader explanatory power: the determination of the Cold War policymakers and their respective institutions to maintain “Washington rules” rather than allow them let them to be supplanted by alternative approaches to national security. “To those whose interests were served by preserving that strategy, this was an intolerable prospect,” writes Bacevich.

In his concluding chapter, Bacevich returns to this pivotal concept of personal and institutional self-interest as a driving force in the militarization of U.S. policy but broadens it even further. “Who benefits from the perpetuation of the Washington rules?” he asks. In answering that question, he describes a socio-political-bureaucratic system that encompasses goes beyond the “military-industrial complex”. Washington rules, he argues, “deliver profit, power and privilege to a long list of beneficiaries: elected and appointed officials, corporate executives and corporate lobbyists, admirals and generals, functionaries staffing the national security apparatus, media personalities and policy intellectuals from universities and research organizations.”

Although Bacevich does not develop this explanatory approach in detail in Washington Rules, this emphatic statement of the thesis that a powerful and broadly-defined self-interested elite blocks the way to dismantling the system of “permanent war” raises an intriguing possibility. A central weakness of the anti-war movement in the United States has long been the absence of a common analysis of the problem of U.S. militarism that could be translated into a strategy for organizing and communicating to a mass movement. Could this Bacevich thesis provide an energizing key for the now scattered and ineffective anti-militarist forces in this country?"