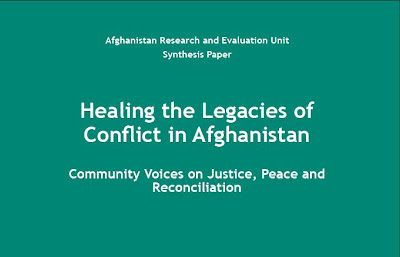 This newest report in the on-going series by the Afghanistan Research and Evaluation Unit focuses on the provinces of Ghazni, Bamiyan and Kabul. It explores the failure of the Afghan government and its international partners to implement a comprehensive program to provide justice or compensation for past and present war crimes. Its strength comes from a reliance on Afghan testimonies.

Accountability starts at the top, not just with Afghan actors, but with the immunity that has been a feature of foreign interventions in Afghanistan for the last 30 years.

“Ten years after the overthrow of the Taliban, Afghanistan is an environment of escalating conflict and prevailing impunity. In this context, the narrative of the Afghan government and its international partners has increasingly focused on ending the violence through negotiating with insurgent leaders and reintegrating their fighters into Afghan society. In their attempt to secure peace, policymakers have largely failed to include justice as a component of reconciliation and reintegration processes. This has continued the predominant approach since 2001 (and before) with the need for immediate stability outweighing the need for wartime accountability. The fact that the Afghan government and its international partners have failed to implement a comprehensive program to provide justice or compensation for past and present wartime crimes has inhibited people’s ability to deal with the legacies of conflict. Subsequently, the majority of people participating in AREU’s research said they were struggling to cope emotionally, psychologically and practically, and the desire for some form of “closure” remains strong.”

The author explores in details some of the options available to afghans. Including different models to address conflict that include a retribution model, a restorative model, a reparative model and finally, a forgive and forget model. She also explores the peace and reconciliation options from community-level to national level.

Different Models to Address Afghanistan’s Past and Present Conflicts

"To date, there have been no concerted efforts to deal with this complex legacy of wartime atrocities. At best, this has meant that wartime events have been largely ignored in Afghanistan. At worst, revisionist historical interpretations promoted by the perpetrators of crimes have dominated at the political level. In this environment, the experiences and suffering of ordinary people, who make up the bulk of Afghanistan’s victims, have been largely ignored…."

“The demand for retribution was strong across all research sites. People widely argued that perpetrators of gross human rights violations should face punishment. While respondents suggested a number of different punitive measures, this paper concentrates on the mechanisms that received the most attention and only includes those in accordance with domestic and international law: criminal trials, including state-led prosecutions (administering capital punishment or imprisonment) and international trials; removing individuals from power; and punishing perpetrators through financial or material means. It is possible to broadly compare the provinces, although there was of course variation and fluctuation within communities. Respondents in Bamiyan and Ghazni widely rejected forgiving those guilty of wartime violations and came out strongly in favour of retributive actions. In Kabul Province, the urban community was most in favour of holding people to account. The rural site was more divided over how to deal with the perpetrators of wartime violations, especially between the men and women interviewed. Male respondents were the least in favour while a majority of women supported punishment.”

“Restorative processes are designed to uncover the truth about past events. Establishing a full, official accounting of the past is increasingly seen as an important element to a successful democratic transition. An accurate record of past crimes can make it embarrassing and difficult for official actors to deny them, apply pressure to remove perpetrators from power, and raise awareness toward preventing future abuse. However, in Afghanistan no official enquiry into either specific violations or the general consequences of Afghanistan’s wars has been published to date. Consequently, wartime actors have sought to fill this vacuum by promoting self-serving visions of the past. Most notably, the amnesty law glorified mujahiddin achievements during jihad against the Soviets, which as discussed also led to numerous atrocities. Others, including some who have occupied high-level positions in the Afghan government, deny any direct responsibility for past war crimes despite evidence to the contrary.”

“International law recognises that a reparatory approach is an important way of acknowledging the collective societal responsibility that is owed to victims. Reparations can take many forms to compensate for harm and to rehabilitate the mind, body and status. These can include measures such property restitutions, monetary payments, education vouchers, memorials, apologies, or even the return of a loved one’s body for burial.153 While it may be impossible to fully repair the damage done to victims or make individual assessments of the harm suffered by each, a reparations programme can provide solutions to some of the problems derived from the harm suffered. There is growing consensus in international law that the state is obligated to provide compensation to victims of egregious human rights abuses perpetrated by the government and if the regime which committed the acts in question does not provide compensation, the obligation carries over to the successor government. Sierra Leone’s Truth and Reconciliation Commission (TRC), in its final report, recognised that reparations are a primary tool for rebuilding national trust and encouraging reconciliation. This section concentrates on two broad compensation policies that received the most attention from respondents—symbolic reparation in the form of memorialisation and financial or material compensation.”

“While it may be impossible to fully repair the damage done to victims or make assessments of the harm suffered by individuals, a reparations programme can still offer certain solutions. The idea that the people of Afghanistan should be materially or financially compensated for the wide-scale damage caused by war was strongly supported by people in all research sites. There was a widespread perception that if people’s living conditions were improved and assistance was provided to help them manage the material aspects of their losses then they would be able to handle their wartime grief better. Compensation was identified to have several impacts of varying significance for different groups interviewed: firstly, people felt it would help repair the physical and material damages caused by war; secondly, it could assist healing processes; finally, in some cases, it was presented as an alternative to a retributive approach.”

Peace and Reconciliation in Afghanistan

"The overwhelming majority of people in all research sites stated that they did not currently feel “at peace.” Achieving durable security and long-lasting calm for all of the country was therefore one of the most basic demands shared by all respondents. While in Ghazni people most frequently linked this with ongoing violence in their province and presented a narrow interpretation of peace as the attainment of security, in Kabul and Bamiyan provinces people generally argued that security had largely been reached in their areas, but that they still did not feel they had achieved peace. Instead, they felt that peace in Afghanistan rested on the fulfilment of certain key conditions: security, legitimate government, justice and reconciliation. Even in Ghazni, while immediate responses to questions about peace concentrated on the lack of security, on further expansion peace also clearly encompassed these components. Moreover, reconciliation was identified as a component of both justice and peace. Consequently, processes of justice, peace and reconciliation were seen as intrinsically linked, overlapping and mutually beneficial.

Afghanistan has experienced decades of conflict, which has fractured the bonds between different groups, qawms and ethnicities in the country. Moreover, there is a clear lack of trust between the population and Afghanistan’s leaders. This social context influences prospects for peace and reconciliation. Having addressed the concept of justice for Afghanistan’s conflicts, this chapter explores how people felt peace and reconciliation could be developed at the community level between Afghan people and what is required at the high level to reconcile the different parties to Afghanistan’s conflicts. Finally, it explores people’s perceptions of what a legitimate Afghan government looks like."