Warlords and the liberal peace: state-building in Afghanistan 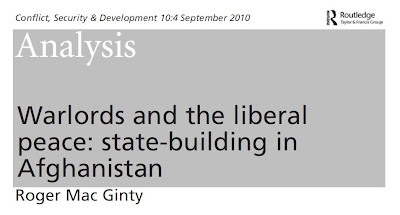 This article by Roger Mac Ginty is pretty heavy on theory but insightful and important. It is part of the ‘war of ideas’ that are inspiring so many Afghans today. Movements for accountability and transitional justice, calls for de-centralized power-sharing, negotiations with the Taliban, and the need to rewrite the constitution are all being discussed.

The article helps to explain where the international community is coming from. Liberal peace in contemporary peacebuilding is the promotion of democracy, market-based economic reforms and a rage of other institutions associated with dominant states.

By examining these concepts Mac Ginty offers a critique of a framework that has guided virtually every post Cold-War intervention conducted in the name of the ‘international community’. That means leading states, leading international organizations and the international financial institutions.

This is about Afghanistan, an exploration of the systems that produce and maintain warlordism, and a discussion on the implications of incorporating warlords into government for the liberal peace. The pro's and con's excerpted.

"This article draws out the contradictions in the liberal peace that have become apparent in post-Taliban state-building in Afghanistan. In particular, it focuses on how warlords have been incorporated into the government. The government has been unable to achieve a monopoly of violence and has relied on the support of some powerful militia commanders to secure itself. This raises a number of practical and ethical questions for the liberal peace. The focus of the article is on warlordism, rather than in providing detailed narrative accounts of particular warlords. The case illustrates the difficulty of extending the liberal peace in the context of an ongoing insurgency."

"Criticisms of the liberal peace are extensive, and conform to the critical traditional in peace studies that is skeptical of ‘problem-solving’ approaches to conflict that seem to minister to manifestations but avoid structural factors. The criticisms can be listed in abbreviated form:

. Ethnocentric (conforming to the cultural and policy mores of the global North);
. Elitist (power is restricted to national and international elites);
. Security-centric (privileges order and security over emancipation and diversity);
. Superficial (disinterested in the underlying causes of conflict and inequality);
. Technocratic and rigid (it reduces peace-building to a series of technocratic,
. Privileges neo-liberal economic policies (it is insufficiently aware of the human costs of shock therapy);
. Conservative (despite emancipatory liberal language, it rarely heralds significant social change).


Notwithstanding the lengthy list of criticisms, and case study evidence to back them up, the liberal peace is not short of defenders. The most prominent defense stems from the international organizations, states, INGOs and policy think-tanks actively engaged in liberal peace projects. They point to the lives saved and improved by liberal interventionism, and note how it is often only leading states in the global North that have the logistical capability and political will to make stabilizing interventions into societies emerging from violent conflict. Moreover, they often stress the paucity of viable alternatives to the liberal peace. Quinn and Cox argue that narratives of neo-imperialism or US hegemony miss the point. Instead, the US and other liberal powers operate benignly: ‘whatever its shortcomings, the settlements produced by American driven interventions are often, at least arguably, equal or superior in quality to the social circumstances they have been imposed to address’."