There’s More to Peace Than the Taliban 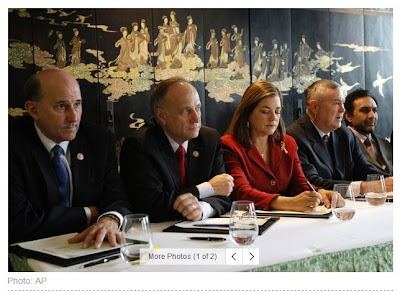 Two arguments highlighting the need to have all parties involved in negotiations for a political settlement to succeed. This is part of a series that will highlight different perspectives on the US strategy of negotiations with the Taliban. So far we have looked at armed groups, next week we will highlight the responses of civil society. The picture above is from the press conference described below.

“On Monday, the alliance stalwarts came out against the Barack Obama administration's secret discussions with the Taliban. These leaders - Ahmed Zia Massoud, brother of late Ahmad Shah Massoud and formerly vice president under Karzai; General Abdul Rashid Dostum, the Uzbek leader who leads the Jumbish in northern Afghanistan; Haji Mohammad Mohaqiq, the Hazara Shi'ite leader from Mazar-i-Sharif who heads the Hezb-e-Wahdat; Amrullah Saleh, former head of Afghan intelligence - held talks with a group of four US congressmen - Dona Rohrabacher, Loretta Sanchez, Louie Gohmert and Steve King (all except Sanchez are Republicans) - in Berlin over the weekend and issued a joint statement on Monday.

This is the first time that the leadership of the Tajik, Uzbek and Hazara communities has come to a common line of thinking to oppose the US's peace strategy and to present an alternate blueprint of pan-Afghan settlement. In essence, the Northern Alliance is being resuscitated as a political entity.

Their statement attacked the power structure headed by Karzai as dysfunctional, far too centralized and rampantly corrupt and demanded that in the first instance what Afghanistan needed was an inclusive parliamentary form of government "instead of a personality-oriented presidential system", which could optimally represent all ethnic and regional interests.

They also sought a thorough revamping of the country's electoral system from the present single non-transferrable voting system to a "national-accepted variant of the proportional representative system" and the direct election of governors and provincial council leaderships with delegation of powers to create budgets, collect revenue and oversee local policing and administer social sectors.

But, most important, they frontally questioned the US's locus standi to initiate peace talks with the Taliban. Their statement said:

We firmly believe that any negotiation with the Taliban can be acceptable, and therefore effective, [only] if all parties to the conflict are involved in the process. The present form of discussions with the Taliban is flawed, as it excludes anti-Taliban Afghans. It must be recalled that the Taliban extremists and their al-Qaeda supporters were defeated [in 2011] by Afghans resisting extremism with minimal human-embedded support from the United States and international community. The present negotiations with the Taliban fail to take into account the risks, sacrifices and legitimate interests of the Afghans who ended the brutal oppression of all Afghans.

In order to speed the withdrawal of international forces, the participants believe it is essential to strengthen regional and national institutions that are inclusive and represent the concerns of all the communities of Afghanistan. [Emphasis added.]


A challenge to Obama

The Northern Alliance statement challenges the US's monopoly of conflict resolution and Washington's unilateralist estimation that the Taliban are the only group that matters as protagonists on the Afghan chessboard in a peace process.

Its entire approach is to take the "Afghan settlement" from the narrow path of a secretive US-Taliban-Pakistan compromise formula to a transparent, inclusive, broadly-participatory inclusive approach that would not ignore any Afghan interest group, which has genuine mass support, from participation, with strong, elected local leaderships that enjoy delegated powers of local governance.

In sum, it offers a vision for returning Afghanistan to its historical character of a federated system of government that allows a plural society to thrive, but with a representative form of government as a modern-day democracy. Indeed, the Northern Alliance statement implies readiness to reconcile politically with the Taliban, provided they "seize" power through the ballot box rather than the guns supplied from the Pakistani military inventory, among other places.

Their challenge to Barack Obama is to concede for the Afghan people the very minimum privilege of an Arab Spring so that Islamism can reconcile with democracy - quintessentially, expecting the US to be on the "right side of history". It is not too much to ask for, really.”

About Talks With The Taliban | Abbas Daiyar

“After years of denial and doubts when the idea of negotiations with the Taliban were proposed seriously for the first time, it is indeed a major development that two parties to the conflict: the United States and Taliban militants have put aside their preconditions of talks such as complete disassociation from Al-Qaeda and acceptance of the Afghan constitution and on the Taliban part, full withdrawal of all foreign troops. However, there are many problems which, if not dealt properly, can end all the excitement of a political settlement into the last abyss of uncertainty and eventual descent into chaos for Afghanistan.

Whatever reasons have caused the positive change in thinking of the Taliban leadership to agree on direct talks with the US, it shows their extreme political immaturity still persisting to ignore the fact that the Taliban have more serious problems of acceptability within Afghan society than with the international community.”

Abbas Daiyar is a journalist from Kabul who has worked for newspapers in Afghanistan and Pakistan. He is a member of the Editorial Board of Daily Outlook Afghanistan, and writes a biweekly op-ed.
Posted by Peter at 2:27 PM