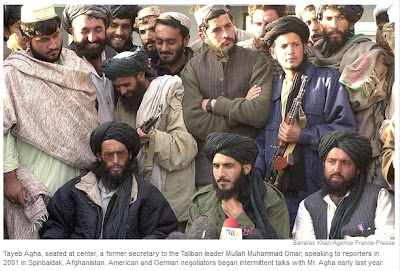 Three insights to help make sense of the long road ahead.

M K Bhadrakumar, a former diplomat from India, offers a regional analysis of the challenges that lie ahead. He highlights the urgent need of a breakthrough by the Obama administration before the NATO summit in Chicago and speculates on the ramification of releasing Taliban detainees held by the United States in Guantanamo Bay Cuba.

“…Fazl's possible release from Guantanamo comes as a masterstroke by Washington aimed at scattering the growing regional bonhomie over the Afghan situation. The Obama administration hopes to release a fox into the chicken pen. Fazl is one of the most experienced Taliban commanders who has been with Taliban leader Mullah Omar almost from day one and he held key positions commanding the Taliban army.

He would have been a favorite of both Mullah Omar and Pakistan's Inter-Services Intelligence (ISI) and his "homecoming" ought to bring joy to both. On the other hand, he was also culpable for the massacre of thousands of Hazara Shi'ites during 1998-2001 and was possibly accountable for the execution of eight Iranian diplomats in the northern Afghan city of Mazar-i-Sharif.

Fazl inspires visceral hatred in the Iranian mind and could create misunderstandings in Pakistan-Iran relations (which have been on an upswing in recent years) and put Islamabad on the horns of a dilemma vis-a-vis Mullah Omar.”

It is precisely this path – and a potential disregard for accountability - that has many in Afghan civil society so worried. Concerned that some of the gains achieved in recent years might be negotiated away.

Lisa Schirch commenting on the civil society forum at the Bonn gathering in early December articulates the Afghan call for a just peace. That any negotiation with the Taliban must included the participation of civil society if it is to be successful.

“What does justice mean in Afghanistan? A decade earlier, the 2001 Bonn Conference on Afghanistan excluded the Taleban while simultaneously including equally atrocity-prone warlords who had fought against the Taleban. The international community allowed the Afghan government to reward these warlords with government positions. This rush for a quick peace in 2001 laid an unstable foundation for peace and contributed to a decade of corruption, further violence and injustice. A just peace requires negotiations between all stakeholders, including armed groups like the Taleban as well as unarmed civil society groups. It also means accountability mechanisms to ensure all are held to account for past crimes. But a just peace will not bargain away the Afghan constitution’s protections of human rights and women’s rights. And a just peace requires a process including the Afghan public.”

Mina Habib, writing for the Institute for War and Peace Reporting offers this on-the-ground-reaction from 23 December 2011.

“Afghans do not want the gains they have made to be sacrificed for deals between the Americans and the Taleban. It is possible they [the Americans] might trade away those achievements,” he said. “They are trying to clinch a deal with the Taleban to secure peace and get America out of the war.”

Lewal said that if talks were to be held, it was essential that the Afghan government was at the centre of them.

“Every negotiation and contact is a positive step towards ensuring peace, and the Afghan people prefer the logic of talks over war,” he said, “but if such talks take place without the Afghan government being aware of them, they could do irreversible damage.”

Mohammad Ismail Qasemyar is a member of the High Peace Council, which Karzai has tasked with negotiating with insurgent groups, and insists this body should manage all talks.

“It has been accepted that the process is an Afghan process, owned by the Afghans…, not foreigners. We will be seriously concerned if this principle is violated,” he said.

In September, the High Peace Council’s chairman Burhanuddin Rabbani was assassinated by a suicide bomber.

Those with long memories recall the last days of the Soviet-backed regime in the late 1980s, arguing that attempts to reach a settlement with mujahedin groups failed because the talks were led by the Russians, rather than the then government of President Najibullah.

“The results of that mistake, that calamity still cause us pain,” Lewal said.