Out of the Loop: The Future of Drones | Shane Harris 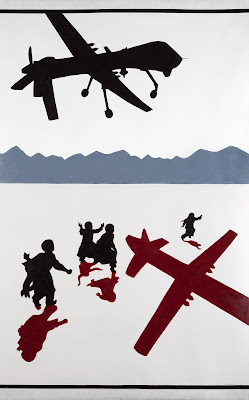 Shane Harris reveals the dangers of relying on robotic/computer technology for modern weapons systems. He does not neglect the threats to international law and morality as well.

“In 1988, the U.S.S. Vincennes, a guided missile cruiser on patrol in the Persian Gulf, shot down an Iranian passenger jet, after the ship’s Aegis targeting system mistook it for a military fighter. The crew of the Vincennes could tell from the plane’s course, speed, and radio signal that it was a civilian aircraft. But Aegis, which had been programmed to identify large Soviet bombers, said otherwise.

“Even though the hard data was telling the crew that the plane wasn’t a fighter jet, they trusted what the computer was telling them more,” Singer writes in Wired for War. “Aegis was on semiautomatic mode, but not one of the eighteen sailors and officers on the command crew was willing to challenge the computer’s wisdom. They authorized it to fire.”

Singer notes that the Navy had such faith in Aegis’s abilities to identify a true enemy that the Vincennes was the only ship in the area allowed to fire on its own volition, without the crew seeking permission from more senior officers in the fleet. All 299 passengers and crew aboard the Iranian jet died, among them sixty-six children.”

Here is the introduction...

"In the game of life and evolution there are three players at the table: human beings, nature, and machines. I am firmly on the side of nature. But nature,I suspect, is on the side of the machines."

—George Dyson in Darwin Among the Machines

"If you want to understand how human beings stack up next to machines in the conduct of modern warfare, consider this:

In World War II, it took a fleet of 1,000 B-17 bombers—flown, navigated, and manned by a crew of 10,000 men—to destroy one Axis ground target. American bombs were so imprecise that, on average, only one in five fell within 1,000 feet of where they were aimed. Aerial bombing was a clumsy affair, utterly dependent on the extraordinary labor of human beings.

Just one generation later, that was no longer true. In the Vietnam War, it took thirty F-4 fighter-bombers, each flown and navigated by only two men, to destroy a target. That was a 99.4 percent reduction in manpower. The precision of attack was also greatly enhanced by the first widespread use of laser-guided munitions.

After Vietnam, humans’ connection to air war became more attenuated, and less relevant. In the Gulf War, one pilot flying one plane could hit two targets. The effectiveness of the human-machine pairing was breathtaking. A single “smart bomb” could do the work of 1,000 planes dropping more than 9,000 bombs in World War II. By the time the United States went to war in Afghanistan and Iraq, one pilot in one plane could destroy six targets. Their weapons were guided by global positioning satellites orbiting thousands of miles above the surface of the earth. And increasingly, the pilots weren’t actually inside their planes anymore.

The historical trend is sobering. As aircraft and weapons have become more precise, human beings have become less essential to the conduct of war. And that may suit the military just fine."

"I do not condemn these strikes; I support most of them. What troubles me, though, is how a new technology is short-circuiting the decision-making process for what used to be the most important choice a democracy could make. Something that would have previously been viewed as a war is simply not being treated like a war.

THE change is not limited to covert action. Last spring, America launched airstrikes on Libya as part of a NATO operation to prevent Col. Muammar el-Qaddafi’s government from massacring civilians. In late March, the White House announced that the American military was handing over combat operations to its European partners and would thereafter play only a supporting role."

"A senior American official said that negotiations were under way to obtain authorization for the current drone operations, but Ali al-Mosawi, a top adviser to Prime Minister Nuri Kamal al-Maliki; Iraq’s national security adviser, Falih al-Fayadh; and the acting minister of interior, Adnan al-Asadi, all said in interviews that they had not been consulted by the Americans.

Mr. Asadi said that he opposed the drone program: “Our sky is our sky, not the U.S.A.’s sky.”

Additional articles on Drones.
Posted by Peter at 8:47 AM