Kabul: A City at Work | Who is the Graffiti Artist? 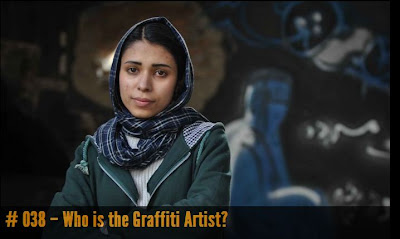 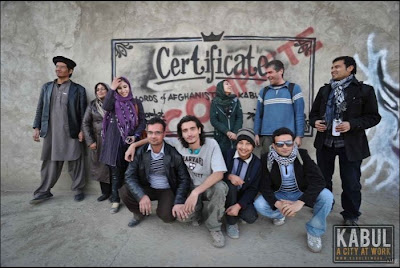 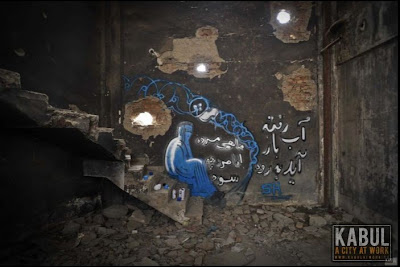 Check out Kabul: A City At Work page.


Who is the Graffiti Artist?

I was born and raised in Iran and in the last 3 years of school I wanted to chose art as my major subject but I was told that as an Afghan I wasn’t allowed. So I studied accounting which was okay but a million miles away from painting.

When my family came back to Afghanistan I tried again and passed into the Faculty of Fine Arts at Kabul University. Art is such a part of my life that I don’t know what would happen if was not able to continue. It would be like having a piece cut out of me.

At present I work with a team of 10 Afghan artists called Roshd, meaning ‘growth’. I do Modern Art. It is something new and so Afghans are against it on principal. They say it’s a western imposition. I don’t see that it has anything to do with the West if the artist and artistic concept are Afghan. My interpretation of art is founded on the classical techniques and styles I was taught.

In December 2010 there was a graffiti workshop that was organized by Combat Communications. Until then, I didn’t know what graffiti was; I had seen some things on the walls in the city but it was advertising not art.I was used to working with paints on canvasses but when I used a spray can for the first time and worked on a big wall it was exciting and cool and such an achievement.

At first I didn’t know what to graffiti as the wall was so big and the spray cans took time to get used to but Chu was a really good teacher. I wanted to do something about women’s rights in Afghanistan and the burqa, but in an ironic way and take the idea of the burqa away from how we are used to seeing it.

But when I was working I had images of all the problems in Afghanistan and all the problems women have here. It was all in front of me, and I felt I wasn’t doing them justice. I worked on an image of a woman in burqa sitting on the ground and had made up a poem about her life. I did few others like her as I wanted to mix the modern style of my painting with their past life to show what kind of life women have in this age.

When I paint, I often paint fish covered with bubbles over their bodies it’s a conceptual idea I have created about not being free to express yourself.

I mean, if a fish opens its mouth, bubbles come out, right? And if its mouth is closed, there are no bubbles. So the bubbles I paint are the bubbles of things it wants to say but can’t. All the bubbles get stuck in its body like artistic ideas with no avenue for expression.

I haven’t been to many places to graffiti. One was the workshop and the other was at the Goethe Institute which is a secure and means I don’t get hassle on the streets, which as a girl, happens almost daily. Sadly It means I don’t get to practice that much so people are like, ‘How can you call yourself a graffiti artist if you can’t graffiti on buildings?’ But it’s just too dangerous to walk around on the streets. Once I went to the Russian Cultural Centre to graffiti and was so scared. It was dark and damp and I was afraid of stepping on a landmine or something.

I graffiti in my own way at home. I have photographs of old alleyways and the walls of Kabul and I graffiti the photograph. It is a comment on the restrictions of women in its own way.

In any case, I don’t think Afghan society is ready to accept graffiti as a form of art. The country has been in war for so long that most people are still pre-occupied with politics or just trying to stay alive.

But generally I only have one wish. I want to see Afghanistan vying with other countries in the art world. In Iran, if you mentioned Afghanistan people would think negative things. In the West, people say there is no art in Afghanistan but if only they came here, they could see what is developing, albeit very slowly. I personally think that art can be so useful for changing the situation of a society, it is part of the culture and culture has a role in representing a country. Everyone has to try as much as possible to rebuild the country, not just artists.