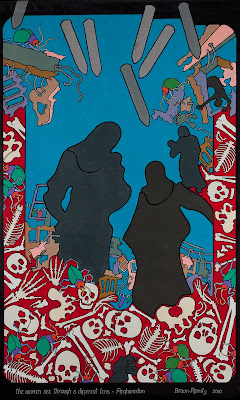 Sari Kouvo and Dallas Mazoori have an accounting of steps being taken in Afghanistan to embrace the concepts of transitional justice. The article was published in the November issue of the International Journal of Transitional Justice.

"Victims are the first people who want peace but peace should come with justice. We do not want revenge or to wash blood with blood but at least these criminals should come and publicly apologize to the people of Afghanistan.

– Man whose brother was arbitrarily detained, tortured and murdered by the Taliban, speaking at the Victims’ Jirga for Justice, Kabul, 9 May 2010"

"I lost two of my children during the civil war. They imprisoned my husband, a medical doctor, for 10 months under the Taliban and he lost his mind under their torture. Under the present government, a judge who had been bribed deprived me of the ruins I had converted to a house, and gave it to somebody who had arrived from Canada.

– Woman who stated she had been a victim of all periods of the conflict, speaking at the Victims’ Jirga for Justice, Kabul, 9 May 2010"

“This article traces the early stages of civil society mobilization for transitional justice and recent efforts to establish a network of war victims in Afghanistan. Specifically, it focuses on the development of the Transitional Justice Coordination Group and its victim-centered activities, such as organizing a Victims’ Jirga for Justice in 2010 and a National Victims’ Conference in 2011. It also situates these developments in the context of the broader transitional justice and reconciliation processes occurring in Afghanistan.”

“Afghanistan has faced over three decades of conflict, beginning with a Communist coup in 1978, followed by a decade of Soviet occupation, a civil war, the emergence of the Taliban regime and, after the US-led international military intervention, ethnic and political tensions within the internationally supported government led by President Hamid Karzai and now a military conflict between a resurgent Taliban and the Afghan government and international forces. The civilian population has suffered during all phases of the conflict. Which region, ethnicity or segment of society has been most targeted has depended on who was in power at different times, but illegal detention, torture, disappearances, killings and indiscriminate bombings have been an Afghan reality for decades.

The UN-sponsored power-sharing conference organized after the US-led military intervention gave little attention to justice and accountability. However, the resulting Bonn Agreement did call for the establishment of the AIHRC, which has become one of the staunchest promoters of transitional justice in Afghanistan. National consultations undertaken by the AIHRC, the findings of which were released in 2005, show that the overwhelming majority of Afghans or their families are victims of human rights violations or war crimes and that they expect perpetrators to be prosecuted or removed from power. Moreover, Afghans are clear that, for them, reconciliation and justice are interconnected. They are equally clear that justice is integral to peace, with 76 percent of respondents believing that bringing war criminals to justice would increase stability and bring security. Only 10 percent felt that stability and security would decrease as a result.”

The strength and independence of the Afghanistan Independent Human Right Commission (AIHRC) has been challenged since all of its directors were not offered contract extensions at the end of December.

Additional posts on transitional justice are here. For a detailed accounting of the Afghan experience with war, go here.
Posted by Peter at 8:54 AM