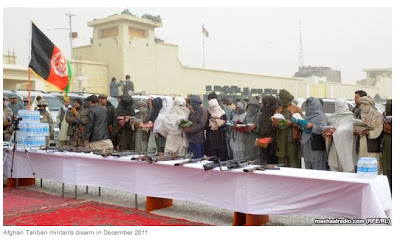 - reproduced in full below -

After a decade of insurgency, the Afghan Taliban says it has reached preliminary agreement to set up a "political office" in Qatar and is willing to enter talks.

The group did not say when the office would open.

"We are now ready to open a political office outside the country [Afghanistan] along with our strong presence inside the country for negotiations with the international community," a Pashto-language statement issued to journalists said. "In this regard we have reached an agreement with Qatar and other relevant sides."

The Taliban office is seen by Western and Afghan officials as key to moving forward with efforts to reach a negotiated end to a decade of war in Afghanistan.

In Kabul, Afghan analyst Wahid Mozhdah called the move a good omen. "I think this is a good step because one of the major problems so far was that the Taliban did not have an address where they can be contacted and from where they can issue their statements and let their positions be known," he said. "It will pave the way for beginning the peace talks."

The Taliban statement, also issued on their purported website the "Voice of Jihad," said that the group is demanding the release of its prisoners from the U.S. detention facility in Guantanamo Bay as a form of prisoner exchange.

Kabul last month recalled its ambassador to Qatar for consultations over reports that the Taliban was planning to open an office in the Persian Gulf state.

But last week, President Hamid Karzai said his government would accept the Qatar location if the United States insisted on it -- adding that Saudi Arabia or Turkey would be preferable venues.

Since then, the head of the foreign relations department of the Afghan High Peace Council, Mohammad Ismail Qasimyar, has said negotiations with the Taliban could now move in the right direction.

"There are no differences of opinion over establishing a [Taliban] office in Qatar so that they have a known address," he told RFE/RL's Radio Mashaal on January 3. "[And this will help] in moving the negotiations forward with them."

The peace council is tasked with seeking a negotiated solution to the country's three-decade-old conflict.

But its efforts were hampered by the September assassination of its head and former Afghan President Burhannudin Rabbani. He was killed by a suicide bomber posing as a Taliban peace envoy.

"It is a gesture of good faith," he said. "The Taliban are blacklisted by the U.S. so it is very important for them to engage in talks with the U.S. "

The Taliban first emerged in 1994 in southern Afghanistan and controlled most of Afghanistan before the demise of their regime in late 2001. The group and its allies have been fighting President Hamid Karzai's Western-backed government and NATO-led troops during the past decade.

The hard-line Islamist movement vowed that it would not drop its goal of establishing a theocratic government.

"The Islamic Emirate of Afghanistan [the Taliban] has always said that the occupation must end," the Taliban statement said. "And Afghans should be allowed to form an Islamic government that would not harm anybody."