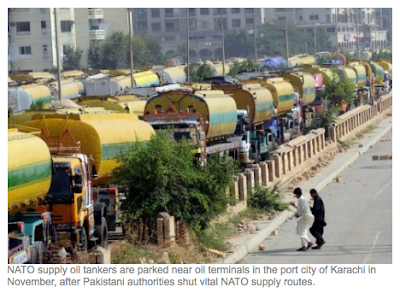 As fuel becomes scarcer and pricier in the Afghan capital Kabul, many are pointing the finger at NATO for buying up oil products domestically to make up for blocked supplies from Pakistan.

NATO has been unable to bring in fuel across the Pakistan border since late November, when Islamabad imposed a blockade and choked off a major supply artery for the 130,000-strong American-led force.

Relations between Islamabad and Washington have been deteriorating fast, and Pakistan closed the route in protest at a NATO airstrike on its border that killed 24 of its soldiers on November 26.

Since then, the United States has had to pay six times as much to import supplies via alternative routes, according to an Associated Press report on January 20.

While most of NATO’s supplies are now coming in via Uzbekistan along a route known as the Northern Distribution Network, NDN. Even before Pakistan closed down the supply route, NATO was switching over to the NDN because of frequent attacks on convoys on the roads south. US officials say 85 per cent of the fuel for the military now come from the north.

Afghan businessmen say the international force is topping this up with purchases inside the country. This is affecting the market, forcing up prices and making petrol and public transport more expensive for the locals.

Mohammad Qorban Haqjo, chief executive of the Afghan Chamber of Commerce and Industry, confirmed that 20 local firms had signed a lucrative fuel supply deal with NATO.

“The contract was signed recently and is worth one billion dollars,” he said, adding that some of the firms belonged to relatives of senior Afghan officials.

NATO insists it has sufficient supplies of fuel and that the Pakistani blockade will not affect Afghans.

“The people of Afghanistan will not be challenged by NATO buying their fuel and their food. NATO’s stockpiles are more than sufficient,” NATO spokesman Brigadier-General Carsten Jacobsen said on January 2, according to the AFP news agency.

However, Kabul residents insisted they were being affected.

“Since NATO forces started buying on the domestic market, not only have prices increased, but fuel is no longer available consistently,” Hajji Sayed Ahmad, who owns a petrol station in the city’s Deh Mazang district.

The shortage has prompted him to raise his prices, much to the annoyance of his customers.

“We have fights with dozens of people every day,” Ahmad said. “They think it’s our choice to increase fuel prices.... The general public don’t realise that fuel isn’t widely available and that the foreigners are buying it up.”

Kabul taxi drivers have increased their fares, leaving people queuing in the freezing cold for hours as they wait for cheaper but more erratic bus services. Once on the buses, they find that ticket prices have also increased.

“First you can’t find a bus, and then when you do find one, you get charged double the price,” said Mohammad Afzal, a resident of the city’s District 15.

While his bus trip to work previously cost the equivalent of 60 cents, Afzal now pays one dollar.

Taxi driver Mohammad Amin said inflation was driving him out of business. He has regular rows with customers because he has raised his fares, but even then he is taking home virtually nothing, he said. He said that when he asked petrol station owners why fuel prices had gone up, they blamed NATO.

Kabul University economist Hamidullah Faruqi said the capital’s transport system was in danger of collapsing unless the government intervened in the fuel crisis.

Separately from the clampdown on NATO supplies, Afghans say hundreds of their trucks are held up in Pakistan, further affecting the price of goods.
Posted by Peter at 2:08 PM