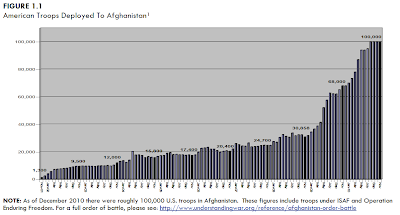 Jason Burke writing for the Guardian in Kabul reports that talks will resume later this month around a strategic partnership allowing a long-term presence of U.S. troops and bases. The US wants to conclude an agreement before President Obama makes his announcement about the initial drawdown of troops to start in July. His article is entitled "Secret US and Afghanistan talks could see troops stay for decades."

The Afghan negotiating team wants to bring any agreement or principles of an agreement to a Loya Jirga. Many believe the on-going presence of US troops would prevent a political settlement to end the conflict with the Taliban.

“The Afghans rejected the Americans' first draft of a strategic partnership agreement in its entirety, preferring to draft their own proposal. This was submitted to Washington two weeks ago. The US draft was "vaguely formulated", one Afghan official told the Guardian.”

There are three key points of contention.

1) A request from the current government for fighter aircraft
2) A prohibition on US forces to attack surrounding countries
3) That US forces be subject to Afghan law. No immunity

"One is whether the Americans will equip an Afghan air force. Karzai is understood to have asked for fully capable modern combat jet aircraft. This has been ruled out by the Americans on grounds of cost and fear of destabilising the region.

Another is the question of US troops launching operations outside Afghanistan from bases in the country. From Afghanistan, American military power could easily be deployed into Iran or Pakistan post-2014. Helicopters took off from Afghanistan for the recent raid which killed Osama bin Laden.

"We will never allow Afghan soil to be used [for operations] against a third party," said Spanta, Afghanistan's national security adviser.

A third contentious issue is the legal basis on which troops might remain. Afghan officials are keen that any foreign forces in their country are subject to their laws. The Afghans also want to have ultimate authority over foreign troops' use and deployment.

"There should be no parallel decision-making structures ... All has to be in accordance with our sovereignty and constitution," Spanta said."

For good measure, officials have confirmed that all options are on the table.

“American officials admit that although Hillary Clinton, the US secretary of state, recently said Washington did not want any "permanent" bases in Afghanistan, her phrasing allows a variety of possible arrangements.

"There are US troops in various countries for some considerable lengths of time which are not there permanently," a US official told the Guardian.”