Letters to My Daughters | Fawzia Koofi 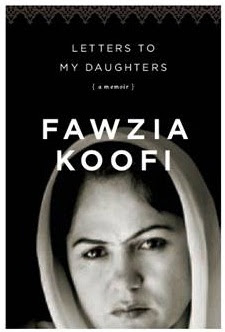 Feminist theory broke ground around a fundamental point that is so well accepted it is practically gospel. It’s that the personal is political.

It helped changed the way we think - preparing us to accept the voices of Afghans as best suited to explain their condition. Whether from elite families or unknowns, some of the most powerful voices you will find about the impact of the wars in Afghanistan are women.

By sharing their experience, strength and hope we can better understand the violence that has plagued Afghanistan for so long. This review by Licia Corbella speaks plainly. It is the women of Afghanistan - witnessed in this memoir - that will change their future.

Kawzia Koofi is currently on a visit to Ottawa.

""Even the day I was born, I was supposed to die." Thus begins the first chapter of Letters to My Daughters, by Fawzia Koofi, one of Afghanistan's most popular members of parliament, in a memoir that grabs its readers by the throat and doesn't let go. Call it a death grip -after all, Koofi has literally run for her life on numerous occasions starting at the age of four when life in Afghanistan started to unravel after the Soviet Union invaded the rugged country in 1979.

Besides risks to her own life, her father, Wakil Abdul Rahman, an MP for the northern Afghan province of Badakhshan, which she now represents, was murdered, as were four of her brothers. "I have stared death in the face countless times in my 35 years, but still I'm alive. I don't know why this is," she muses.

About one year before Koofi was born, her mother grew depressed after her husband brought home a new bride -a 14-year-old girl. That girl bore a son and Koofi's mother, who was six months pregnant herself, hoped that she too would bear a son to gain back the favour of her husband. It was not to be.

"Semi-conscious by the time I was delivered, (my mother) had barely enough energy to express her dismay at the news I was a girl. When I was shown to her, she turned away, refusing to hold me," writes Koofi.

"No one cared if the new girl child lived or died, so while they focused on saving my mother's life, I was wrapped in cotton muslin swaddling cloth and placed outside in the baking sun. I lay there for almost a day, screaming my little lungs out." Sounds horrific, but within a few chapters, it's impossible not to fall in love with Koofi's mother -Bibi jan -an illiterate woman described as the "kindest, most talented teacher in the world" who suffered terribly during her life.

"I recall watching in horror once as my father chased my mother along the corridor and began beating her," writes Koofi. "Once, my father viciously tore out a chunk of her hair during a beating. . Beating was a normal part of marriage," something virtually all Afghan women and girls expect to be a part of their lives.

Such passages reinforce what many Canadians believe about Afghanistan's medieval ways and its violence, but what this book accomplishes so beautifully is that it reminds readers of the humanity of Afghans. Despite the tragedy that has gripped the lives of almost every Afghan over 30 years of war, these are people with aspirations and sentiments not unlike our own.

Each chapter starts with a letter from Koofi to her daughters, Shuhra, who will turn 13 later this month, and Shaharzad, 11. While these letters are full of love, wisdom and advice, it is the narrative of Koofi's life that will keep you turning the pages. Reached at her hotel room during a visit to Ottawa on Thursday, Koofi is just as engaging to talk to as her book is compelling to read.

While Koofi says she has been keeping a gruelling schedule of media interviews and public readings on her cross-Canada book tour, she is accustomed to long days of travel, meeting with her constituents in the impoverished northern part of Afghanistan and tending to her legislative duties in Kabul.

But in Canada, where her life is not under constant threat by the Taliban, she says despite the hectic pace, she finds it relaxing. Koofi makes a point of thanking Canadian troops for their sacrifice and the positive difference they have made to her country. She mentions Calgary Herald reporter Michelle Lang, who was murdered by the Taliban near Kandahar on Dec. 30, 2009: "The Taliban like to kill women. They think it will stop other women from having courage and working to change our country. But it was the women and children of Afghanistan who suffered the most under the Taliban and living under the Taliban is worse than death, so they will never be able to kill the resolve of Afghan women to make a better country for their children."

After Koofi's father was killed by mujahedeen fighters, her mother allowed her to attend school. It was there, while watching television, that she learned about British prime minister Margaret Thatcher and Indira Gandhi in India. But seeing those powerful rulers on television wasn't the spark that has Koofi vowing to run for president of Afghanistan in 2014. It was her parents -the musings of her mother and the political dynasty established by her father -who set her ambitions to lead.

Koofi is disappointed Canada's mission in Afghanistan is coming to an end and is gravely worried for her country.

Helping Afghanistan "is what I live for," writes Koofi at the end of her book. "And it is what I know I will die for." Here's hoping this brave woman has many more years of leadership before that happens. She might just change the world."

Licia Corbella is a columnist and editorial page editor of the Calgary Herald.

Click here to learn more about Fawzia Koofi.
Posted by Peter at 9:06 AM