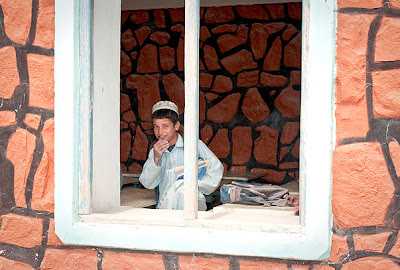 Yesterday 27 U.S. Senators sent a letter to President Obama urging a sizable and sustained withdrawal of US forces from Afghanistan beginning next month. Nearly half the Senate Democratic Conference, including 10 committee chairmen signed the letter.

Sizable and sustained should also define the support international institutions and governments commit to help Afghans repair an education system battered from decades of war.

While officials hail progress on education vast challenges remain. Only half the country’s schools have the premises and teaching materials they need.

This story, Afghan Schools Short on Buildings and Books is about Kapisa, a province northeast of Kabul. The reporter, Maiwand Safi, has been trained by the Institute for War and Peace Reporting (IWPR).

“The deputy director of education in Kapisa, Abdul Rasul Safi, told IWPR that 78 of the 212 schools in the province had no premises of any kind.”


"When a Soviet-backed administration was in power in the 1980s, mujahedin groups often targeted schools that they believed were nests of communist ideology. Their capture of Kabul in 1992 produced an internecine conflict in which schools were looted and commandeered. Then came the Taleban, who allowed schools to reopen, but just for boys, and prescribed only a loose curriculum based largely around Islam.

Since 2001, international donors have injected large amounts of money into construction programmes, so that the education ministry now says that half the 14,100 schools in Afghanistan have the premises, laboratories, libraries and teaching materials and equipment they need.

Afghans flocked to send their children to school as soon as it became to be possible, although boys still out number girls six to four on the school rolls. But many feel let down by the continuing shortage of textbooks, trained and motivated teachers and basic classroom facilities.

Education ministry spokesman Abdul Sabur Ghofrani argues that while a great deal of progress has been made, the government cannot do everything at once.

With 7,000 schools still lacking buildings, he said, “The education ministry is using its development budget to build premises for 1,000 schools a year, and will continue to address this problem.”

One success highlighted is the growth of the teacher-training colleges. Addressed in a previous post from Zaher Wahab entitled Dispatch from Afghanistan | Ray’s of Hope.
Posted by Peter at 8:10 AM