Detained and Denied in Afghanistan | HRF 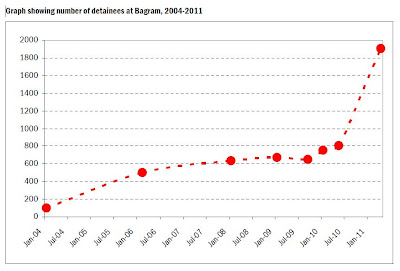 Detained and Denied in Afghanistan
How to Make U.S. Detention Comply with the Law
A New Report from Human Rights First

You can click on the graphic to expand the chart.

The U.S. Prison at Bagram now holds almost ten times as many detainees as are being held at Guantanamo Bay.

Prisoners at the U.S.-run Bagram Air Base in Afghanistan now have the right to appear before a board of military officers to plead for their release and challenge the claims that they are “enemy belligerents” fighting U.S. forces.

Prisoners still do not have the right to see the evidence being used against them, or the right to a lawyer to represent them.

“The laws and Constitution are designed to survive, and remain in force, in extraordinary times. Liberty and security can be reconciled; and in our system they are reconciled within the framework of the law.” –Boumedienne v. Bush

After many years of completely denying detainees in Afghanistan the opportunity to defend themselves against arbitrary detention, the United States government has finally implemented a hearing process that allows detainees to hear the charges against them and to make a statement in their own defense. While a significant improvement, these new hearings fall short of minimum standards of due process required by international law.

In imprisoning people indefinitely without meaningful independent review, the United States is depriving these detainees of their liberty, casting suspicions upon them in their community and often depriving extended Afghan families of their primary breadwinner and source of protection and support. Because imprisoning suspected insurgents is such a serious matter for the men themselves, for their families and for their communities, it is incumbent upon the United States government to create a mechanism that ensures that those it is holding are dangerous insurgents and not innocent Afghans.

Only by providing detainees in Afghanistan an opportunity to defend themselves in a meaningful manner with the assistance of legal counsel and the opportunity to confront witnesses and the evidence against them can the United States ensure that it is imprisoning the right people. Moreover, only by providing real due process, and demonstrating by example what due process requires, can the United States expect to win the trust and respect of the Afghan people, who see themselves as vulnerable to U.S. military power.

The death of Osama bin Laden is likely to increase pressure on the Obama Administration to withdraw U.S. troops from Afghanistan soon. As the United States draws down its military involvement, it should shift some of those resources toward a civilian effort to improve the rule of law in Afghanistan.

The United States’ goal of helping Afghanistan improve its justice system is an important and laudable one. In the long term, it will help stabilize the country by encouraging Afghans’ respect for their government and trust in their government institutions to protect them. Improving the administration of justice in national security cases will also directly help to ensure that violent insurgents remain incarcerated and cannot threaten Afghan national security. Given the sorry state of the Afghan justice system after decades of war and entrenched corruption, however, this goal is necessarily a long-term one. Even after the United States withdraws the bulk of its troops from Afghanistan, ongoing support for its fledgling justice system will be necessary, and critical to the country’s stable development. Human Rights First urges the United States government to take a long-term view of the problem and to commit to civilian assistance for Afghan judges, lawyers and legal institutions far into the future.