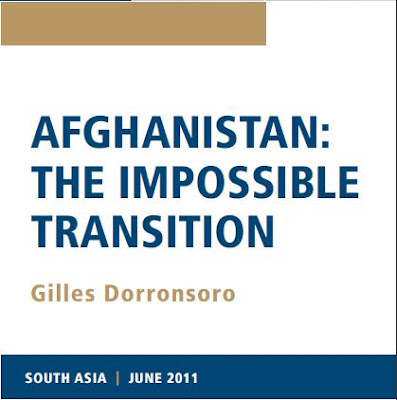 Gilles Dorronsoro lays out the need for a dramatic new U.S. policy in Afghanistan. Arguing that “… Western withdrawal requires a political agreement with the Taliban leadership, which implies abandoning the coalition’s reintegration policy.”

“A combination of two critical problems threatens to undermine the mission of the United States–led coalition in Afghanistan: the failure of the counterinsurgency strategy and a disconnect between political objectives and military operations. If anything, the current strategy is making a political solution less likely, notably because it is antagonizing Pakistan without containing the rise of the armed opposition. That has put the coalition in a paradoxical situation, in which it is being weakened militarily by a non-negotiated and inevitable withdrawal while at the same time alienating potential negotiating partners.”

“The U.S. strategy is hard for the public to understand; in fact, despite ambiguities stemming from varying assessments within the Obama administration, the United States is banking, at least as far as we can see on the ground, on a military victory. Targeted strikes against Taliban fighters are the weapon of choice to destabilize the insurgency and force the fighters to surrender. The “reintegration” program, to which the United States has already allocated some $50 million, represents the institutional cornerstone of this policy. Contrary to what is often said about local and national approaches complementing each other, reintegration is fundamentally contrary to any negotiation process because it assumes the progressive weakening of the insurgency. Likewise, operations in the provinces of Kandahar and Helmand must succeed for the coalition to change perceptions in Afghanistan and in the West and to disrupt the Taliban movement in areas where it is strong. Military progress would then allow the coalition to gradually withdraw. This strategy assumes that sufficient time and money have been allocated, which explains why the importance of July 2011—the withdrawal’s scheduled beginning date—is being played down in favor of 2014, the slated end of the transition. In effect, the U.S. army plans to maintain military pressure on the Taliban during the next three years while security responsibilities are transferred to the Afghan army.”

Gilles Dorronsoro, a visiting scholar at the Carnegie Endowment, is an expert on Afghanistan, Turkey, and South Asia. His research focuses on security and political development in Afghanistan, particularly the role of the International Security Assistance Force, the necessary steps for a viable government in Kabul, and the conditions necessary for withdrawal scenarios.

He is the co-founder and editor of the South Asian Multidisciplinary Academic Journal and the European Journal of Turkish Studies. He is the author of Revolution Unending: Afghanistan, 1979 to the Present (Columbia University Press, 2005), and La révolution afghane, des communistes aux Taleban (Karthala Publishers 2000), and editor of La Turquie conteste. Régime sécuritaire et mobilizations sociales (Editions du CNRS, 2005).
Posted by Peter at 1:57 PM