Three of Ten Refugees from Afghanistan 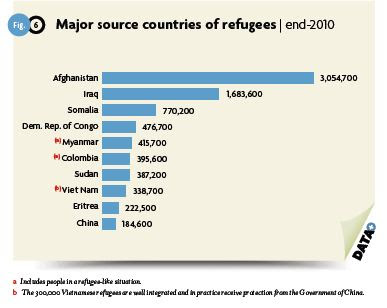 Yesterday was World Refugee Day. The numbers are always shocking. You can click on the chart above to expand.

The UN Refugee Agency* released their annual global trends report for 2010. The report reveals that 43.7 million people are now displaced and that more refugees are stuck in exile for five years or longer than at any time since 2001. The report also finds that four fifths of the world’s refugees being hosted by developing countries.

Afghan and Iraqi refugees accounted for almost half of all refugees under UNHCR’s responsibility worldwide; three out of ten refugees in the world were from Afghanistan (3 million). Afghans were located in 75 different asylum countries. Iraqis were the second largest refugee group, with 1.7 million people located primarily in neighboring countries.

Pakistan was host to the largest number of refugees worldwide (1.9 million), followed by the Islamic Republic of Iran (1.1 million) and the Syrian Arab Republic (1 million; Government estimate).


*NOTE: Palestinian refugees and the countries that host them are not included in this report. UNRWA (the United Nations Relief and Works Agency for Palestine Refugees in the Near East) provides assistance, protection and advocacy for some 4.8 million registered Palestine refugees in Jordan, Lebanon, Syria and the occupied Palestinian territory. Palestinian are the only refugee community in the world not included in the work of UNHCR.
Posted by Peter at 1:04 PM