A Long Goodbye: The Soviet Withdrawal From Afghanistan 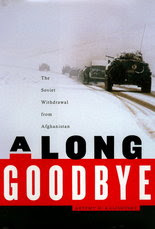 Lessons to be learned...

During the Cold War, Western Kremlinologists would scrutinize the reviewing stand at May Day parades to see which Politburo members were in and which were out.

He sketches a candid portrait of the Politburo's frustrations and doubts over the 10-year military campaign, which ended in the 1989 retreat.

At a meeting to discuss the invasion, Soviet diplomat Mikhail Kapitsa pointed out "that the Soviet intervention would face enormous difficulties and cited the experience of the British troops in the nineteenth century. [Soviet President Andrei] Gromyko reportedly asked, 'Do you mean to compare our internationalist troops with the imperialist troops?'

"Kapitsa replied, 'No, our troops are different, but the mountains are the same!' "

Within a year of taking power in 1978, the Afghan Communists were asking the Soviet Union for help. As early as 1980-81, some Russian experts doubted the Afghanistan problem could be solved by the military. By 1982, Soviet leaders were looking seriously for a way out.

But they feared losing face by departing. They worried that their influence among Third World nations would abate and that Afghanistan itself would fall into anarchy.

By 1986, Soviet leader Mikhail Gorbachev was calling the war a "bleeding wound." The next year he confided, "We were pulled into Afghanistan, and now we don't know to get out. . . . It's awful when you have to defend Brezhnev's policies."

The story carries a familiar ring. Kalinovsky, who teaches at the University of Amsterdam, uses the word "quagmire" often.

Some 12,000 Soviet soldiers died before it was over; roughly 40,000 were wounded. A mind-numbing 1.2 million Afghans perished. Afghanistan was the Soviet albatross, as the Vietnam War was for the United States.

"A Long Goodbye" reminds its readers of the U.S. military incursions in Afghanistan and Iraq. Kalinovsky doesn't dwell on why the Soviets went in, but wonders why it took the country so long to bring its soldiers home.

The Soviet fought a "limited war, much more so than the U.S. involvement in Vietnam," he writes. The invasion deployed only 100,000 soldiers out of a standing army of 5 million. And Kalinovsky contends it was not a factor, as some have said, in the breakup of the Soviet Union in 1991.

Yet it was extremely difficult for the Soviets to extricate themselves. "The single most important reason," Kalinovsky writes, is "that they continued to believe the USSR could help stabilize Afghanistan, build up the Afghan armed forces, and make the Kabul government more acceptable to its people."

For Gorbachev, retreat was part of wider strategy of seeking cooperation with the United States in reaching a political solution to a regional conflict. But he wanted the United States and others to stop funding the mujahedeen. We refused.

Kalinovsky has produced an academic study with a narrow focus on the decision-making and diplomacy of Soviet leaders. It makes for dense reading. It is thin on the context of Afghanistan itself and the rise of Islamic fundamentalism.

Yet the U.S. reader cannot miss the resonance of this story. It may be even more relevant now that Osama bin Laden is out of the picture.

Eleanor Mallet is a critic in Shaker Heights, Ohio.
Posted by Peter at 10:56 AM