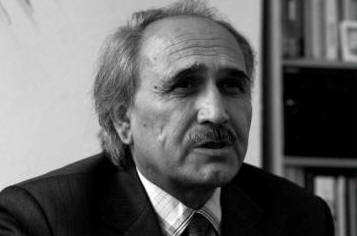 Perhaps life is Satan himself
awakening a wicked man to murder

And here I give thanks
on the brink of ‘victory’


*Translated by Sarah Maguire for the VOICES | Education Project

Partaw Naderi was born in Badakhshan in northern Afghanistan, in 1953. Steeped in the rich traditions of Persian poetry, his bold innovations have led him to be regarded as one of the leading modernist poets in Afghanistan. He studied in his birthplace and graduated from the Faculty of Sciences at Kabul University in 1354 [1976]. He was imprisoned in the notorious Pul-e-Charki prison by the Soviet-backed regime for three years in the 1970s shortly after he’d begun to write poetry. He is now widely regarded as one of the leading modernist poets in Afghanistan, the lyrical intensity of his work coupled with his bold use of free verse distinguishing him as a highly original and important poet. After years in exile he recently returned to live in Kabul where he is president of Afghan PEN.
Posted by Peter at 12:28 PM