Talking to the Taliban | Thomas Ruttig 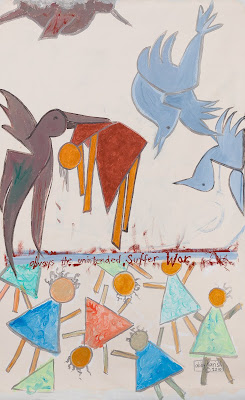 From the travelling mural exhibit Windows and Mirrors: Reflections on the War in Afghanistan.

Thomas Ruttig looks at Saturday’s speech by Hamid Karzai on talking to the Taliban (T2T).

On Sunday defense secretary Robert Gates for the first time confirmed that the US and other foreign powers were involved with ‘outreach’ talks with the Taliban.

Andrew Lebovich has a summary.

The postscript deals with demands the government of Afghanistan has before they would agree to any Afghan-US agreement for a long-term presence of US troops and bases.

“It is even not clear whether every actor involved in the T2T drama really wants peace: The US military continues to try crushing the Taleban militarily and possibly to avoid substantial talks. The Taleban have started their own kill campaign of key Afghan security forces leaders, particularly of Northern provenience. (Not much ‘capture‘ here, except for non-famous people, in order to intimidate.) Taking yesterday’s attack in the centre of Kabul into consideration, it also does not speak of any will for peace – or of an inability to control some hawkish ‘faction‘, or of the famous ‘hidden hand’ that doesn’t want to have talks outside its control. In that case, someone should have another word with Islamabad.

And whether the President himself wants to share power and access to the Western resources as long as they are flowing (and some will continue to flow also after 2014) one can only doubt. The business networks around his brothers make profit most when the status quo is kept: a not-too-intensive war without complete state breakdown. Talks (about talks) as delaying tactics? That wouldn’t be new in world history.”

Regarding a long-term US-Afghan Agreement

“… [H]e also spelled out his conditions for signing the Afghan-US strategic agreement. He said he has stopped thanking the foreign troops for what they were doing for his country (and that it was only Spanta who always forced him to do so), that the foreign troops used weapons that threaten Afghans’ health and Afghanistan’s environment, criticised NATO's campaign in Libya, warned that he would boycott the Bonn 2 conference in December if the Taleban were not there and reproved the listening youth against 'Westernisation'. He did not elaborate: Was he against the use of mobile phones, watching Indian ‘un-Islamic’ soap operas or other bad influences of Western democracy? In any case, this part not only caused the ulema sitting in the first row to applaud but also the otherwise indifferently listening young people.”