Beyond Power Sharing: Options for an Afghan Peace Process 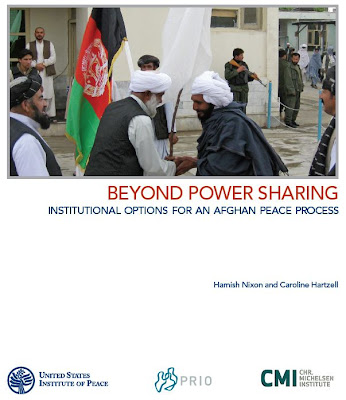 This paper is part of a joint research project to identify issues and options to support durable peace in Afghanistan. The collaborating organizations are the United States Institute of Peace (USIP), the Peace Research Institute Oslo (PRIO), and the Chr. Michelsen Institute (CMI).

Introduction: Peace Is Possible
Challenges for a Peace Process: Analyzing the Afghan Conflict
Initiating and Structuring a Negotiation
Transitional Arrangements and Implementation Challenges
Beyond Power Sharing: Institutional Arrangements for the Long Term
Conclusions

"The Framework: Any negotiated settlement to the Afghan conflict should involve a set of transitional arrangements to govern the period between the signing of a peace settlement, a cease-fire, and the entry into force of more permanent institutions for conflict management."

A big lesson from the Iraq war of 2003 is the need for firm deadlines for the removal of foreign troops and bases. The vision and options set out in this report have a better chance of being implemented if that reality is kept at the center of all discussions and dialogue.

The need for a peace process to end the conflict in Afghanistan becomes clearer with each passing month, just as quickly as hopes for one often seem to recede. Despite many positive changes, ten years of deepening international involvement, both military and civilian, have been accompanied by a pattern of mounting violence. Since 2009 a dramatic escalation by NATO of both conventional counterinsurgency and special operations has certainly cost the insurgency lives and territory, and the prospects of an outright Taliban victory seem negligible. At the same time, the Taliban movement and its allies have shown resilience and flexibility, presenting a consistent tactical challenge in narrowing areas of the south and broad areas in the southeast and east, while extending their reach in the north. A string of high-profile at¬tacks and assassinations has undermined government and NATO claims of increasing security and eliminated key government allies, while deepening tensions among political factions with distinct ethnic overtones, raising the specter of a widening civil conflict."

"This report takes a different approach. Rather than lifting wholesale the experience of other peace processes that writ large may have limited applicability to the complexities of Afghanistan, it examines some specific challenges a peace process in Afghanistan will face, and then presents theoretical observations and some real world comparative examples that may be applicable to these challenges. The report does not aim to recommend a complete or a single set of institutions for an Afghan peace process, but rather to stimulate discussion on how to connect the particular challenges an Afghan peace process faces with the possibilities for peace that careful and innovative arrangements can and have produced even in complex and seemingly intractable conflicts."

Additional posts on Peace Building.
Posted by Peter at 11:51 AM