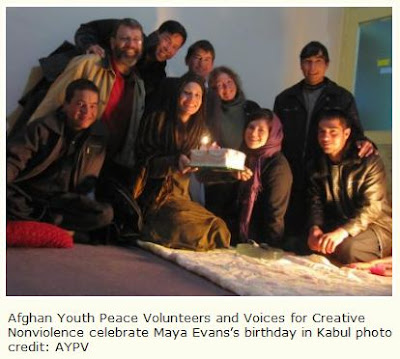 "Arab Spring, European Summer, American Autumn, and now the challenge of winter. Here in Kabul, Afghanistan, the travelers of our small Voices for Creative Nonviolence delegation share an apartment with several of the creative and determined “Afghan Youth Peace Volunteers” who’ve risked so much for peace here and befriended us so warmly over the past two years.

Yesterday, I met with three young people who’ve sustained an inspiring example of community formation. Weeda Ahamd directs the Social Association for Afghan Justice Seekers, with help from Basir and Riha, her co-workers.

During their University years, Weeda and her colleagues had become impassioned on behalf of achieving social justice for those brutalized and bereaved by the violent forces at work within Afghanistan. “We realized that many young people who were thinkers had sacrificed their lives” said Weeda. “They refused to say anything but the truth, and there are so many of them to remember. Whereas the war criminals in power will not remember any of these people, we will hold up the pictures in walks. Some of them are people whom family members have not seen for a long time. These are the heroes whom people of Afghanistan should remember.”

Since 2007, Weeda and her colleagues have worked to gather information about people killed, imprisoned or disappeared by armed forces. They go to villages and talk to families who have lost loved ones to Taliban fighters, US/NATO forces, warlords and druglords. They carefully preserve the data. Once it became public that they intended to issue their report, they received threats from several warlords. The report should appear in the near future.

Not only do Weeda and her co-workers assemble stories, documents and pictures from the families of victims of war, they also help build supportive communities amongst the families whose trust they have gained through their repeated visits. Then they invite the families to form larger networks and come together for public protests and demonstrations, demanding an end to the wars. Grassroots democracy is even harder work at gunpoint.

“It’s always a present reality that we could die tomorrow or be killed,” said Basir, “but we would rather do that than have people remember us in the future as people who didn’t live in a principled way. We hold on to truth and justice principles. We’d rather live this way than live under the control of those who commit the crimes.”

“Crimes are not only crimes of the past,” Weeda explains. “War criminals are continuing to commit the crimes, and the US and NATO give military, political and financial support to the war criminals. Their militaries commit crimes as well.

“If a government were formed by the people of Afghanistan,” says Weeda, “we wouldn’t find Afghans easily accepting permanent military bases. Nor would they accept warlords in positions of power.”

She wishes that activists beyond Afghanistan, whose governments are occupying and fighting in her country, would pressure their own governments to stop interfering in the affairs of other countries.

“Any human with a conscience needs to consider himself or herself as a member of the larger human family,” says her colleague, Basir. “I feel I am a member of every family that has become a victim of war. Hundreds of mothers have buried their children with the beautiful white burial cloth. Hundreds walk the streets without a father.”

Weeda is aware that a solution is not easy. She says it may take a long time and insists it must come from the people themselves. Uprisings in the Middle East have encouraged her. “We need to get out into the streets,” she says, recalling images from Cairo. “There, people filled the streets as far as you could see.” Smiling softly, she mentioned the “Occupy” movement. “Maybe they will highlight the crimes that their governments are committing here,” she said, “and speak out against them — call on them to end complicity with war criminals.”

It’s hard work in the winter, and it seems like winter everywhere, but we create small patches of warmth to get us through the winter. All around us, people are finding hope in new connections and in their own startling example of the determination to create hope for others; fear is being traded in for ardent compassionate service; visions are being exchanged, seeds planted beneath the snow, crossing borders and creating new, unprecedented circumstances.

The warmth we keep alive now, the fires we stoke in a dark season, are small, but they’re everywhere. There is simply no predicting what we may be building with the work we do now to keep ours lit, guarding precious human warmth as we move towards another astonishing Spring."

Additional Resource:
Social Association of Afghan Justice Seekers
Posted by Peter at 10:28 AM