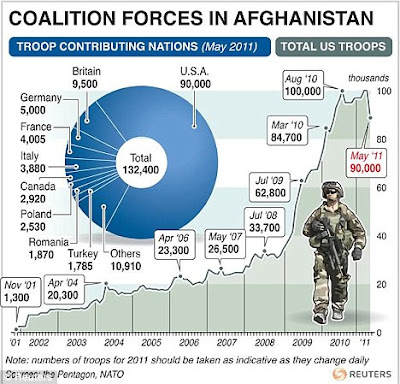 The Associated Press has some details.

“During the one-day conference, about 100 nations and international organizations, including the United Nations, jointly pledged political and financial long-term support for war-torn Afghanistan to hinder it from falling back into chaos or becoming a safe haven for terrorists.”

“The United States announced it would free more than $650 million in support for small community-based development projects in Afghanistan, frozen because of financial irregularities in Afghanistan's key Kabul Bank.”

Jean MacKenzie writing for the Global Post has context and the reduced expectations.

Thomas Ruttig comments - Reading Between the Lines at Bonn II

“Finally, last but not least (and only because we have reported from their two-day conference on 2-3 December already), the statements from the two Afghan civil society representatives were extremely strong. They did not limit themselves – as I had feared for a moment – to politeness and indirect messages. The two who, deservedly, had more time than most foreign ministers, reiterated their message of the days before. Barry Salam said that ‘we have chosen democracy’ and ‘we want peace and reconciliation, but not when it jeopardises our fundamental rights and freedoms. […] Therefore we cannot change our constitution and compromise on our democratic rights’, Barry Salam stated. ‘We need a government that rules by law but not by the power of individuals’. His demand for the full inclusion of civil society in key decision-making processes could have been more direct, but should not be overlooked just because of this.

His female colleague, Selay Ghaffar, strongly advocated an ‘end [to] the prevailing culture of impunity’ and for transitional justice. She made clear that Afghanistan’s problems do not only lie in the Taleban or al-Qaida. She said that, ‘in the current system, there are elements in power who committed war crimes [and] need to be brought to justice. […] Giving a ministry to those who committed rapes and war crimes is like committing these crimes again.’ This is the strongest message of the day, and an explanation of the current quagmire which is not only military, but also moral. It is a message that Western governments probably still don’t want to hear.”

Last month, The State Department Office of the Special Representative for Afghanistan and Pakistan reported that U.S. economic and humanitarian aid to Afghanistan has peaked in 2010 at $4.1 billion and would be reduced to $2.5 billion this year.

A Decade of Mistakes
Posted by Peter at 12:39 PM