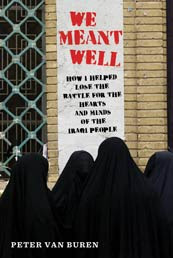 We Meant Well, is an insider account of the civilian side of the surge in Iraq. The challenges and failures should be lessons for Afghanistan.

Of course there are differences; major UN agencies and well funded international NGO’s remain active in Afghanistan, and the country is one of the poorest in the world. However.

The odious role of military-controlled reconstruction teams linking humanitarian and development assistance to a military strategy is the same for both countries. As in Iraq, these opposing efforts led to confusion and resentment, becoming band-aids, symbolic measures to mitigate the destruction of escalating military action.

This book, and reports from many NGO’s on-the-ground make a clear call to end the military's role in development.

Here are the questions for Afghanistan. Will the U.S. learn these lessons as the military surge winds down in Afghanistan? Is it possible to offer transparent and sustained support to Afghan governmental and nongovernmental institutions seeking to heal the wounds of war?

We Meant Well:
How I Helped Lose the Battle for the Hearts and Minds of the Iraqi People
By: Peter Van Buren

“From a State Department insider, the first book recounting our misguided efforts to rebuild Iraq—a shocking and rollicking true-life cross between Catch-22, Dispatches and The Ugly American.

Charged with rebuilding Iraq, would you spend taxpayer money on a sports mural in Baghdad’s most dangerous neighborhood to promote reconciliation through art? How about an isolated milk factory that cannot get its milk to market? Or a pastry class training women to open cafés on bombed-out streets without water or electricity?

According to Peter Van Buren, we bought all these projects and more in the most expensive hearts-and-minds campaign since the Marshall Plan. We Meant Well is his eyewitness account of the civilian side of the surge—that surreal and bollixed attempt to defeat terrorism and win over Iraqis by reconstructing the world we had just destroyed. Leading a State Department Provincial Reconstruction Team on its quixotic mission, Van Buren details, with laser-like irony, his yearlong encounter with pointless projects, bureaucratic fumbling, overwhelmed soldiers, and oblivious administrators secluded in the world’s largest embassy, who fail to realize that you can’t rebuild a country without first picking up the trash.

Darkly funny while deadly serious, We Meant Well is a tragicomic voyage of ineptitude and corruption that leaves its writer—and readers—appalled and disillusioned but wiser.”