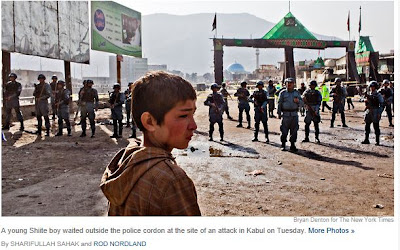 One day after the after a Bonn conference dominated by state actors tragedy has struck in Afghanistan.

Coordinated noon-time bombings in Kabul and Mazar-i-Sharif have left 60 dead with many more wounded and traumatized. Eyewitness accounts report that 56 people were killed in Kabul where hundreds of Shia were singing at the Abu Fazal shrine. A third attack in Kandahar did not result in any deaths.

Nobody has claimed responsibility for the attacks, and a Taliban spokesperson has condemned them. The attacks coincided with the Shia festival of Ashura. An important day in the Shia calendar and observed as a public holiday in Afghanistan.

The on-going war threatens to deepen division across the board - ethnically, politically and regionally.

The escalating violence is fueled by all sides with 2011 likely to replace last year as the most deadly year yet for Afghans.

As the most powerful military and economic force in Afghanistan the U.S. must be clear in regional and internal dialogue that includes all groups involved with the violence. On that front Bonn was a failure.

Until that is clear the cycle will continue.

“Attacks have targeted Shi’as in two of Afghanistan’s major cities as they gathered for Ashura, to lament the martyrdom of Imam Hussein and members of his family in Iraq in 680 AD. The attack in Kabul was particularly serious and left dozens dead. Such violence is a new phenomenon, says Kate Clark, deeply troubling and potentially very dangerous for Afghanistan, which has managed to avoid the sort of sectarian and indiscriminate attacks suffered by Pakistanis and Iraqis in recent years. At least, she says, all parties so far, including the Taleban, have condemned.”