The Pakistanis Have a Point | Bill Keller 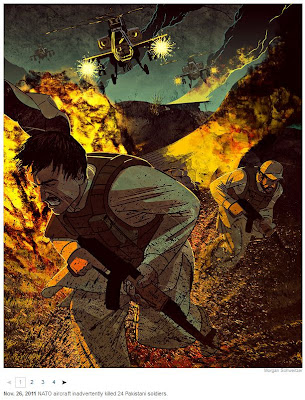 Bill Keller had this long expose in the weekend magazine section. It is an important effort to articulate the Pakistan perspective in the relationship with the United States. It also has some great graphics. Click to enlarge.


His point is really simple, “it’s hard to be an ally of the United States.”

The Pakistanis Have a Point

“The Pakistani version of modern history is one of American betrayal, going back at least to the Kennedy administration’s arming of Pakistan’s archrival, India, in the wake of its 1962 border war with China.

The most consequential feat of American opportunism came when we enlisted Pakistan to bedevil the Soviet occupiers of Afghanistan in the 1980s. The intelligence agencies of the U.S. and Pakistan — with help from Saudi Arabia — created the perfect thorn in the Soviet underbelly: young Muslim “freedom fighters,” schooled in jihad at Pakistani madrassas, laden with American surface-to-air missiles and led by charismatic warriors who set aside tribal rivalries to war against foreign occupation.

After the Soviets admitted defeat in 1989, the U.S. — mission accomplished! — pulled out, leaving Pakistan holding the bag: several million refugees, an Afghanistan torn by civil war and a population of jihadists who would find new targets for their American-supplied arms. In the ensuing struggle for control of Afghanistan, Pakistan eventually sided with the Taliban, who were dominated by the Pashtun tribe that populates the Pakistan-Afghanistan frontier. The rival Northern Alliance was run by Tajiks and Uzbeks and backed by India; and the one thing you can never underestimate is Pakistan’s obsession with bigger, richer, better-armed India.”