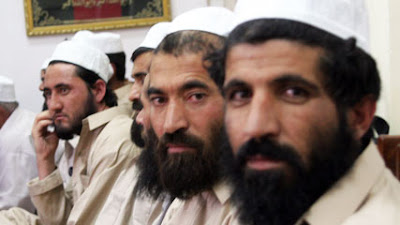 Martine van Bijlert is one of the bloggers with the Afghanistan Analysts Network. This lengthy profile documents the randomness of arrest sweeps and the terrible conditions of detention. This remarkable story (unique only because it is told) shows the insidious alliance between various American and Afghan special forces and the role of the US controlled detention center. The International Committee of the Red Crescent (ICRC) makes an appearance, but the delivery of letters falls short of the protections they propose to enforce. The Afghanistan Independent Human Rights Commission as an Afghan body to ensure the rights of Afghans is shown as powerless with the US center.

“There are so many stories of people who get caught up in the nightly operations by American and Afghan forces. In the search for 'kill & capture' targets the net is cast wide: once a door is kicked in all males in a household are usually taken for interrogation. And it is then anyone's guess when they will be released again.

One story - out of many - of how an unlucky sleep-over resulted in years of detention, and what those years were like.”

His release it telling.

“I was released a few weeks ago. At my release an American colonel apologized to me. He said that they had concluded that I was innocent and that I had worked for the good of Afghanistan. He said that after 2.5 years! They gave me a bottle of perfume, but they did not return my possessions. When I was arrested I had $6000 on me, as an advance for the medicines, and also my mobile phone and some afghanis. They did not give them back yet. At the time I didn't say anything, I just wanted to leave. But they should give it back.”