Student Art from the Ashes of War 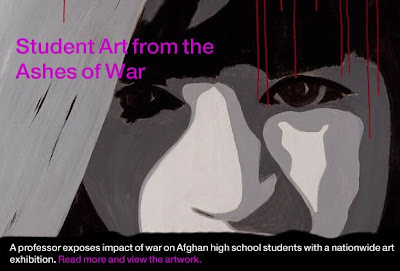 Last June, while teaching in Kabul, Professor Zaher Wahab asked Afghan High School students – boys and girls – to draw pictures of their experience with war. These powerful images have been incorporated into the traveling mural exhibit Windows and Mirrors: Reflections on the War in Afghanistan.

In this interview, Wahab discusses why Americans need a visual reminder of the war in Afghanistan, now the longest war in U.S. history.

What kinds of experiences and emotions are the Afghan high school students expressing in these drawings?

I could see the expressions on their faces as they drew. They experience or witness war and violence all the time—it’s very normal—and the drawing gave them the opportunity to reflect on their condition. The drawings show details of their reality that most children here would not express: the airplanes are all bombers instead of passenger jets; there are a lot of amputees—Afghanistan has the most amputees of any country in the world. There are many Kalashnikovs, knives, and whips. You see a prevalence of pain, suffering, and anguish that comes from death, dying, and destruction.

When I asked the students to draw the pictures, I had no idea their drawings would end up in a nationwide exhibit in the United States—the students thought they were drawing for fun and self-expression. I didn’t give them any cues or leads. I just asked them to draw their thoughts and feelings about Afghanistan. The images they created are all about violence, war, and survival. There’s nothing there about play or kids having fun.

It’s very clear from many studies from Harvard, Johns Hopkins, and the Afghan Ministry of Public Health and others that the vast majority of Afghan people suffer from some kind of mental illness because of the 34-year war, non-stop occupation, and violence. It’s a nation that is deeply traumatized. Most of the men, women, and children have had direct experience with violence from shootings, bombings, and/or roadside IEDs [improvised explosive devices]. It’s part of people’s thinking, and you can see it in the way people talk to each other. They worry about staying alive, staying healthy, having food, water, shelter, and other basic necessities. Children are robbed of their childhoods; adults are mangled. Only half of children go to school because of insecurity, lack of schools, or the need to work to support their families.

What kind of reaction is the exhibit receiving from American audiences?

People are stunned. Most are uninformed, misinformed, and propagandized. You can’t imagine the suffering that the murals and drawings portray. Some don’t see, and can’t see, beyond the drawing. Some people want to donate money. Students ask how they can organize for change, justice, and peace. The exhibit may also bring up the psychological and ideological baggage people carry with them like Islamophobia and xenophobia, which has developed because of the way Afghans are represented by mainstream media and spokespersons for the military-industrial-political complex.

How does this exhibit challenge Americans to accept their identity as a nation at war?

You would hope it would confront people. Art can be very eloquent and powerful. I’m hoping this whole exhibit will prick the conscience of the American people, confront them, make them uncomfortable, and induce them to pause and think about the country’s arrogance, violence, and indifference to human suffering. I hope they will begin to ask, “Is this moral? Productive? Should we end this? What is my role and responsibility as a citizen, a member of the human family?”

To voice your opposition to the war, you’ve offered public testimony, published op-eds, and blogged about conditions in Afghanistan. What inspired you to get involved in this visual art project, and how do you think this medium makes a different impact than others?

This society is so video-ized, so visual, so isolated from others. Imagination seems impaired. We are not a reading nation. Empathy and sympathy seem to have atrophied amongst many in this society, so it’s hard for people to relate to the severity of the human suffering in Afghanistan, 13,000 miles away. The Afghans had nothing to do with 9/11, and yet that point is forgotten. And they have nothing against this country. So, you just hope to educate people to relate to other people’s interests, needs, pain, and suffering.

I am hopeful that someday sanity will prevail. And we have to do the right thing regardless. I was raised and educated to do the best I can and make life better for others and change the world. It’s part of my constitution. Who knows how many people will see these exhibits—in seven cities in the country—and be informed and inspired by them.

This interview is currently on the college home page.

Slideshow of Student Art from the Ashes of War
Posted by Peter at 1:10 PM